By: Peter Kent and Tyler Bain and
Updated: 07-02-2021
From The Book: Cryptocurrency Mining For Dummies 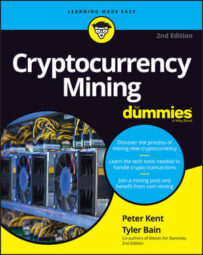 Explore Book Buy On Amazon
After you have your hardware running, you’ll need to install the appropriate software to mine cryptocurrency. The software you’ll use depends on whether you’re pool mining or solo mining, your hardware setup (ASIC, GPU, or CPU), and the particular cryptocurrency you plan to mine.

In some cases, the mining software replaces the entire operating system (ethOS and Braiins OS, for example), but in other cases, the software is application software that runs within another operating system, typically Microsoft Windows, Linux, or Apple’s macOS (such as Multiminer, niceHash, and Honeyminer).

Pool mining is a cooperative mining system in which thousands of individual crypto miners work together to mine blocks and share in the rewards proportional to their individual contributions of hash power.

Pool mining is recommended for steady and consistent mining rewards. Some work with all three, while some with only one of these systems.

If you bought an ASIC or a prebuilt GPU rig, your rig most likely already has mining software installed on it. ASIC mining rigs generally come equipped with a manufacturer-provided operating system (running on the ASIC’s control board), with a simple graphical user interface. You will work with this operating system from another computer, connected to your local network; you’ll use a web browser to navigate to the unit’s IP address on the LAN.

See the manufacturer’s documentation to properly set up the mining software. If you purchased a prebuilt GPU frame, that most likely comes with an operating system and mining software, too.

However, many of these manufacturer-provided systems are not open-source. Some implementations have been prone to issues, such as backdoors, remote monitoring, and lack of full overclocking or other efficiency limitations, so miners often replace their manufacturer’s software. (If you’re interested in finding out more about possible efficiency limitations or back doors, search for bitmain asicboost scandal and antbleed scandal.)

Lots of downloadable programs are specifically designed for mining cryptocurrencies. However, many of them are from unreliable sources, and some may include malware or other computer viruses. To avoid that issue, here is a list of a few reliable mining software programs designed to mine towards pools.

While setting up pool-mining software designed for Windows and macOS to run on your laptop or desktop PC is generally pretty simple, working with some of these other systems can be far more complicated.

Setting up, say, ethOS or Braiins OS can be fairly straightforward for an experienced Linux user. However, if you’ve never left the Windows or macOS operating systems or your idea of dealing with a complicated software installation process is letting your employer’s tech guy have the computer for the afternoon, then some of this stuff will be out of your zone of experience!

You’ll either need to find a friendly geek to help or understand that you will have to read instructions very carefully and quite likely will expend serious amounts of time learning how to get the job done.

Most mining software is designed for ASIC and GPU mining because they are the most efficient systems and the sorts of systems used by most experienced miners. The non-ASIC cryptocurrencies, such as Monero, are an exception, as they are intended to be mined with CPUs and GPUs. (If you can GPU mine, you can CPU mine, too, but GPUs are far more powerful.)

However, CPU mining profitably is difficult. Most Monero miners are GPU mining, though they often use the CPU in the GPU rig in addition.

It’s generally not worth it to CPU mine. If you do intend to mine with your CPU, probably the only software it makes sense to use are the niceHash and Honeyminer programs.

Solo mining is not recommended unless you have very carefully run the numbers and are sure it makes sense. You need to fully understand and accept your odds (which may be low), or you need significant enough network hash rate to ensure profitability. With that said, quite a few software implementations allow for configurable solo mining.

Most solo mining tools require that you download and sync a full node of the cryptocurrency you intend to mine on a separate computer system on your network and then point the software running on your ASIC or GPU mining rig to the full node on that computer. Heavily research the documentation for the software you plan on using before firing up your mining equipment.