What Is a Digital Nomad? 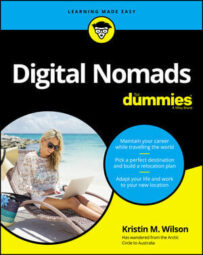 At a basic level, a digital nomad is someone who can work from anywhere using the Internet or other technology. Not all nomads work, however. Some live on income from pensions, investments, and other recurring revenue streams they can access remotely.

Digital technology has all but erased borders for business and communication. Just as a remote company doesn’t have a physical office or central headquarters, a digital nomad doesn’t necessarily have a fixed place of residence. Your home can be wherever you are (or wherever you find Wi-Fi).

Digital nomads have all types of different jobs. They can work for themselves or someone else. They can work part time, full time, or on a contract basis. They can even stop working if they develop ways to live off automated or passive income streams.

Digital nomads can include:

The table below provides some detail about the different types of digital nomads.

A nomad by many names

The term, digital nomad, has become a buzzword. But, as with gender or sexual orientation, digital nomads can choose to identify with another term or kick labels to the curb altogether. Other ways to self-identify under the digital nomad umbrella include: These are just a few examples of the many ways that people choose to describe their lifestyles.

Remoteness is a sliding scale. Just as there are hybrid organizations, there are also hybrid nomads. You can combine different types of jobs and income streams to create a lifestyle that suits you.

In this section, I dig deeper into digital nomad demographics. You find out where digital nomads are from, what they do for work, how old they are, and how much they earn. An overview of the U.S. digital nomad population is shown in the figure below. Do you see yourself represented here? 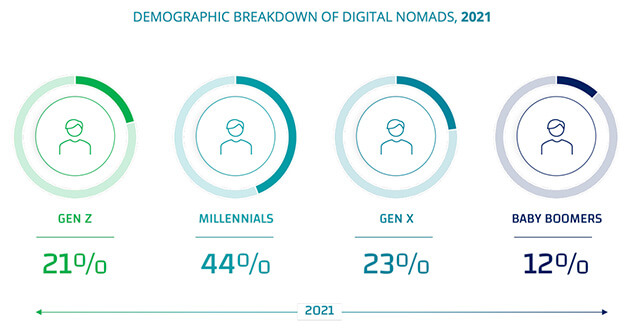 You might think that a digital nomad lifestyle is more suited to younger generations, but research shows that people of all ages dabble in digital nomadism. One Facebook groups study calculated the average age of digital nomads to be 40 years old, with the oldest nomad in the study being 72.

In 2021, Millennials made up the largest segment of digital nomads, with 44 percent, followed by Gen X, Gen Z, and Baby Boomers.

Although only 12 percent of digital nomads were Baby Boomers in 2021, according to MBO and FlexJobs, they made up a third of the population two years earlier. Researchers believe this decrease was temporarily attributed to COVID-19 concerns in high-risk groups.

People from many parts of the world

Although most of the data on digital nomad demographics comes from U.S.-based research, the digital nomad population is global. A survey of English-speaking nomads in Facebook groups recognized nomads from at least 39 countries.

In a 2018 Fiverr survey of Anywhere Workers, 57 percent of respondents were from the United States, with the rest representing countries such as Kenya, Myanmar, Slovakia, Canada, Colombia, Romania, Venezuela, Indonesia, Australia, India, and the Philippines.

To estimate how many digital nomads there are worldwide, it’s assumed that a certain percent of independent contractors and remote workers alike will experiment with a nomadic lifestyle at times.

In the most comprehensive report on digital nomads to date, MBO Partners found that 15.5 million Americans (or 10 percent of the U.S. workforce) described themselves as digital nomads. The number of U.S. digital nomads increased by 20 percent during 2019–2021, as the world adopted remote work on a mass scale.

The United States wasn’t the only country with people working from home, of course. In 2021, China’s flexible work population reached 200 million people. The government has since released a five-year “Digital Economy Development Plan,” encouraging citizens to seek Internet-based employment.

Currently, only 11 million Chinese identify as digital nomads. But if 10 percent of the Chinese workforce went nomadic, that would be 140 million people!

And in 2021, Ireland passed the Right to Request Remote Work Bill in an effort to normalize flexible working in Irish society.

Governments from Angola to Belgium and beyond have passed or announced some form of remote working legislation for their citizens. That’s on top of the 40 plus countries offering remote work and digital nomad visas for foreigners.

The more remote work is regulated throughout the world, the more companies will adapt to such legislation, freeing millions of people from the office in the process.

The reported male to female ratio of digital nomads has varied widely over the years. In the Anywhere Workers study, 63 percent of respondents were men and 37 percent were women.

However, FlexJobs estimates that 70 percent of digital nomads are women. And the 2021 survey among digital nomad Facebook groups uncovered an even split of 49.81 percent females and 50.19 percent males.

Folks at every career stage

Digital nomads span all generations, industries, backgrounds, and careers. From the present day and beyond, many high school and college grads will never step foot into an office. They may be the first generation to start their careers as nomadic workers from day one.

The digital nomad lifestyle doesn’t discriminate, however. Plenty of people transition to digital nomadism mid-career or in retirement.

Employees from an assortment of industries

Nomads come in an array of fields. The one thing nomads have in common is that they can do their jobs online or earn an online income. The rest is up to you! Some of the most common industries where you’ll find nomads include (according to MBO Partners):

Because digital nomads represent a diversified mix of the global population, their income is as varied as their job titles.

Although Fiverr found that more than half of “anywhere workers” were freelancers in 2018, the ratio of salaried to self-employed nomads is evening out. MBO’s research suggests that the number of salaried nomads tripled between 2019 and 2021, with many remote employees being “high earners.” 44 percent reported earning at least $75,000.

Previously, Fiverr’s Anywhere Workers study found that 57 percent of nomads earned less than $50,000 per year, with 10 percent earning $100,000 or more. That number could be on the rise, though. FlexJobs asserts that 18 percent of nomads make six figures or more, with 22 percent making between $50–100,000.

Remote working women tend to earn less than men, though, with more than one study finding that “the gender pay gap has no borders,” according to Fiver’s Anywhere Workers study.

Either way, there’s no limit on how much money you can make in the digital nomad lifestyle, especially when you combine multiple income streams. You can also save a lot, too. Many remote workers engage in geo-arbitrage, earning a high income while living in rural areas or developing countries with a low cost of living.

Fortunately, freedom doesn’t have to cost a lot. 21 percent of nomads earn less than $25,000 per year, according to MBO Partners. But regardless of how much money digital nomads make, 85 percent are happy at work and 79 percent are satisfied with their income. It just goes to show that money doesn’t necessarily buy happiness — so long as it buys the ability to travel!

Kristin M. Wilson has travelled to over 60 countries during her 20 years as a digital nomad. She reaches 130,000 subscribers on her “Traveling with Kristin” YouTube channel. She’s also host of the “Badass Digital Nomads” podcast, recorded weekly from wherever in the world Kristin currently calls home.