The Hybridization of Machine Tools

Explore Book Buy On Amazon
It used to be that lathes turned, mills milled, printers printed, and that's all they did. But things began to change a couple decades ago when some clever machine-tool designers began adding milling attachments and sub-spindles to CNC lathes, followed by actual machining center–style spindles and milling axes. Suddenly the number of operations needed to complete turned parts dropped dramatically.

The hybridization of machine tools has continued apace. Recent examples include machining centers equipped with three-dimensional printing or cladding heads, lathes with grinding and hobbing capabilities, and laser heads on Swiss-style turning machines. The goal of these machine tools hasn't changed from the early days of milling-capable turning centers — to complete parts in as few operations as possible (see the following figure), even though the number of machining operations now possible has increased dramatically. 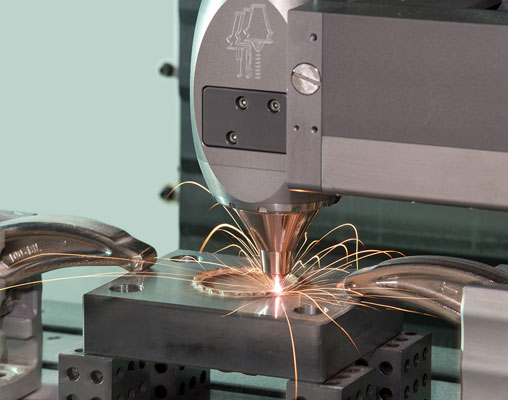 Laser cladding devices such as this AMBIT™ deposition head by Hybrid Manufacturing Technologies are often used to "hardface" parts, alternately depositing thin layers of metal powder that are then fused with an integrated laser system before machining each layer or series of layers.

This is important for several reasons. For starters, fewer operations means less handling, reducing labor costs. There are also fewer fixtures to build, further reducing manufacturing cost as well as product lead time. It means less work in process, or WIP, something any shop owner or her accountant is happy to see. That's because low WIP values mean faster throughput, greater flexibility, and less risk that parts will be damaged or obsoleted while waiting for completion. Finally, and this one's a biggie, completing parts in one or two operations increases part quality, since it eliminates the inevitable inaccuracies that creep in each time a part is loaded into a workholding device.

That said, a few drawbacks exist. Metal removal rates on a hybrid are almost always slower than on dedicated, single-purpose machinery; the milling capacity on even the best live-tool equipped lathe can't compete with that of an equivalent quality machining center (or even an inferior one, in some cases). And because hybrid machines have multiple capabilities, it's not unusual to see some of the machine sitting idle (one of the spindles, perhaps) while an operation is performed elsewhere (on the main spindle, for instance). Minimizing this idle time is called balancing, and it's an important aspect of efficient multitasking machine-tool operation.

Hybrid machine tools are also (relatively) expensive. A single super machine can easily cost two to three times that of its less sophisticated equivalent. Still, for lower quantities and for complex parts that would otherwise require equally complex workholding, hybrid and multitasking machines are a no-brainer. Hybrid machines not only increase flexibility and part quality, but they go a long way toward meeting the demands of customers who want parts delivered quickly, with none of the long lead-times or tooling costs associated with traditional machine tools. For those readers on the fence about such equipment (and assuming they have suitable work to keep one busy), it's time to make the leap.