By: Erica Olsen and
Updated: 03-26-2016
From The Book: Strategic Planning Kit For Dummies 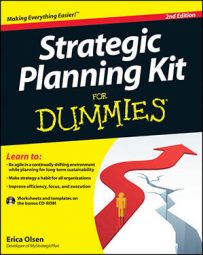 Have you ever wondered what the guy next door is doing all day? Or, more interestingly, what are the CEOs of growing organizations spending their time on? If you could just be a fly on the wall in the offices of some of the Inc. 500 CEOs, I bet you’d discover quite a bit about what it takes to grow an organization.

The Inc. 500, produced annually by Inc. Magazine, comprises the top CEOs of the business world. To be eligible for Inc. 500, companies have to be independent and privately held, have grown from at least $100,000 in net sales in Year One to $2 million by Year Four. In summary, they’re the fastest growing privately-held organizations in the United States today.

The majority of the Inc. 500 CEOs spend an average of 60 hours a week building their business. (Knowing this should be a relief to you if you’re putting in such long hours and often think you’re all alone.)

Although these CEOs are characterized as hardworking, they’re not workaholics, because they set goals first and take action second. Most importantly, they take the time to reward themselves and others based on the achievement of the goals and action.

Workaholics, on the other hand, usually take action first, set goals second, and don’t necessarily celebrate successes. If you’re one of those workaholics out there, consider the strategic planning process as a way to help you set goals and focus on actions you can celebrate.

The Inc. 500 CEOs regularly spend 50 to 90 percent of their time on strategy and business development. Obviously, an organization isn’t going to be a high-growth organization if time isn’t spent on both active strategy and business development. Granted, 50 to 90 percent is quite a large margin, but it gives you an idea of how these Inc. 500 CEOs spend their time.

Take a look at how you’re spending your time each day, and figure out what it really takes to be part of a high-growth company.

Erica Olsen is cofounder and COO of M3 Planning, Inc., a firm dedicated to developing and executing strategy. M3 provides consulting and facilitation services, as well as hosts products and tools such as MyStrategicPlan for leaders with big ideas who want to empower and focus their teams to achieve them.