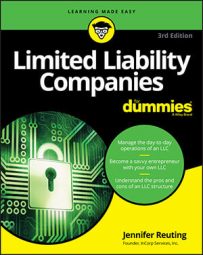 Whether you’re a single-member LLC or you have multiple members, you can always elect to be taxed like a corporation. Corporate taxation is completely different from partnership taxation.

First and foremost, the IRS considers a corporation (or an LLC electing corporation tax status) to be an entity completely separate from its owners and treats it as if it were an individual. Instead of passing through profits and losses to the members, the corporation files its own tax returns.

All a member must report on his personal tax return is the actual cash the company decides to distribute to him, whether in the form of dividends or salary. The member can’t report the LLC’s losses and therefore can’t deduct them against other personal income.

You don’t have to worry about allocations, tax bases, phantom income (allocations that you have to pay taxes on, but don’t actually get the cash to cover the tax bill), and deemed cash distributions because they aren’t relevant to corporations.

Although corporations are taxed as completely separate entities and are treated as individuals in the eyes of the IRS, they do receive a few benefits individuals don’t get. Individuals are required to pay federal income tax on all income. Granted, a good chunk can be deducted, but those deductions usually aren’t so “adequate” at the end of the year because they rarely add up to the amount of money you’re forced to fork over.

Corporations, on the other hand, only pay federal tax on the profits that the company generated throughout the year. This point may not seem very significant, but as someone who’s operated both entity types over the years, I can tell you my business always ends up paying less tax with the corporation tax structure.

When it comes to the corporation tax structure, many people worry about something called double taxation. It’s understandable; who wouldn’t balk at a term that implies paying double the amount of tax? Double taxation occurs when the owners of the corporation take the profit out of the company and the profits are taxed on the individual owner level.

This scenario means that the same profits are taxed once at the corporate level and then again at your (the member’s) level when they’re paid out. As horrific as this situation sounds in theory, it’s usually not so bad in practice.