How to Assess Your Project Stakeholders’ Power and Interest

By: Stanley E. Portny and
Updated: 12-05-2017
From The Book: Project Management For Dummies 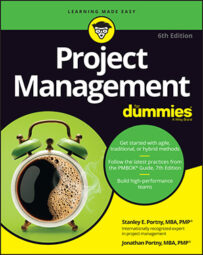 Explore Book Buy On Amazon
A stakeholder’s potential impact on a project depends on the power she can exercise and the interest she has in exercising that power. Assessing the relative levels of each helps you decide with whom you should spend your time and effort to realize the greatest benefits.

Power is a person’s ability to influence the actions of others. This ability can derive either from the direct authority the person has to require people to respond to her requests or the ability she has to induce others to do what she asks because of the respect they have for her professionally or personally.

In either case, the more power a person has, the better able she is to marshal people and resources to support your project. Typically, drivers and supporters have higher levels of power over your project than observers do.

On the other hand, a person’s interest in something is how much she cares or is curious about it or how much she pays attention to it. The more interested a person is in your project, the more likely she is to want to use her power to help the project succeed.

Most often, you base the assessments of a stakeholder’s power over and interest in your project on the aggregated individual, subjective opinions of several parties: you, your team members, your project’s other stakeholders, people who have worked with the stakeholder on other projects, subject matter experts, and/or the stakeholder himself or herself. If you assign a value of 1 to each individual rating of high and 0 to each individual rating of low, you’d rate a stakeholder’s power or interest as high if the average of the individual assessments were 0.5 or greater and low if the average were below 0.5.

The image below depicts a Power-Interest Grid, which represents these four possible power-interest combinations as distinct quadrants on a two-dimensional graph. 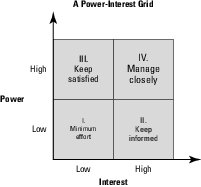 Involving stakeholders with different levels of power and interest in your project.