By: John Morgan and Martin Brenig-Jones and
Updated: 03-26-2016
From The Book: Lean Six Sigma For Dummies 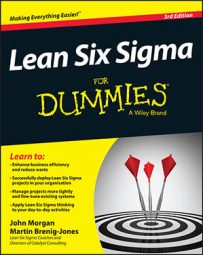 Failure Modes Effects Analysis (FMEA) helps identify and prioritise potential risks for preventive action. In April 2015, Doug Hughes, a mailman from Florida boarded a small personal aircraft called a gyrocopter and flew an hour from Maryland into restricted airspace over Washington, DC, and landed on the West Lawn of the Capitol building.

It was a bizarre incident that riveted the city and shut down the U.S. Capitol for part of the day. According to the U.S. Capitol Police, the aircraft was observed landing at about 1:30 p.m. and the operator was immediately taken into custody. A bomb squad investigated the gyrocopter, but nothing hazardous was found. Law enforcement then took the gyrocopter to a secure location, according to the Capitol Police.

The 'most secure area' in the United States clearly wasn't. It's unclear which agency takes responsibility, but if the postman got through with such ease, what might a suicidal terrorist have achieved or a swarm of drones? The incident highlights the importance of prevention and risk analysis.

Using FMEA would surely have helped identify the 'under the radar' risks to the White House, enabling suitable action to have been taken long before the copter was able to land on the White House lawn.

So, hadn't the relevant agency heard of FMEA, or if it had, perhaps it wasn't too creative in identifying what might go wrong with their security process?

An FMEA assessment is relevant to all industries and organisations, be they manufacturing or service, public or private. It leads to plans for reducing or eliminating the risks identified.

Whether you are looking at a product, service or process, you need to calculate a risk priority number (RPN) for the various potential failure modes — the things that might go wrong. The RPN takes account of severity, likelihood of occurrence, and detectability, as you can see from this table. 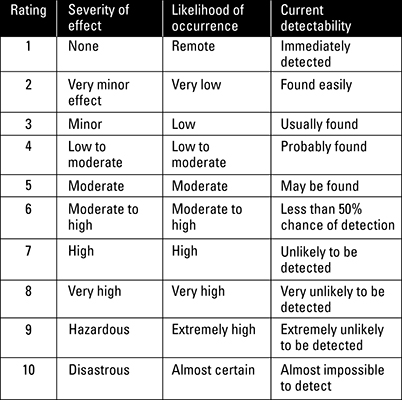 Of course, it's not just the White House that needs to get serious about the threat of drones. They can be a menace to aircraft generally. In the UK, aviation investigators have warned of the growing danger from drones flying dangerously close to aircraft.

In one instance a paraglider pilot had been placed in great peril by the operator of a quadcopter drone — a miniature helicopter powered by four rotor blades — who may have been committing a criminal offence, investigators concluded.

The UK Airprox Board (UKAB), which examines all "near misses", warned that the easy availability of drones, along with the lack of adherence to regulations, "was highly likely to result in future situations where airspace users would be put in danger.

FMEA and prevention techniques, generally, need to be high on the agenda.

Jo Dowdall has 21 years of experience as a Continuous Improvement profes­sional, coach, trainer, and advocate. She is an accomplished Quality Manager and Master Black Belt.

Jo Dowdall has 21 years of experience as a Continuous Improvement profes­sional, coach, trainer, and advocate. She is an accomplished Quality Manager and Master Black Belt.