By: Jeanette McMurtry and
Updated: 09-29-2017
From The Book: Marketing For Dummies 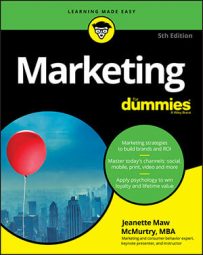 Explore Book Buy On Amazon
In order to get noticed, you need to push the boundaries of traditional marketing. Guerilla marketing is one way you can do this.

Guerilla marketing, also known as ambush marketing, is all about ideas that are outside the boundaries and take competitors and customers by surprise — competitors, because you did something that took attention or market share away from them, and customers, because you did something fun and engaging that exceeded routine expectations or experiences with competing brands.

A short definition is

Actions, messaging, creative, experience, and events that transcend the bounds of traditional marketing that focus on product, service, price, and other common messages

In addition to commanding attention, one of the primary goals of guerilla marketing is to change behavior for the better, or at least how you want consumer behavior to be to drive more sales and loyalty.

One of our favorite examples of changing behavior by changing up routines comes from Volkswagen who created The Fun Theory. This program was built around the notion that fun can change behavior for the better.

For The Fun Theory initiative, Volkswagen asked people to create ideas for changing routine behavior for the better. It then tested and executed winning ideas to see whether they would indeed work.

Here are a few attention‐grabbing ideas that successfully changed routine behavior by doing something new and fun. As you review these ideas, ponder on how you can build on them to create “fun” customer experiences through every touch point of your customer journey — from need identification to purchase confirmation.

You can watch videos of these experiments in action.

So, yes, fun and games motivate behavior, and if used for building brand images and product sales, they can be a highly effective form of guerilla marketing. With enough fun involved, you create a movement or a society frenzy like Pokémon, the game that uses augmented reality to present Pokémon characters on your mobile screen in a depiction of a real setting so that you and your avatar can capture the Pokémon and train them to help you battle against other players doing the same thing on their phones.

Things like these get people’s attention and break into their routine.

Other forms of guerilla marketing can be as simple as offering the best in industry:

Blending guerilla marketing with CSR can have a really powerful impact as well.

The best guerilla marketing tactics are those that are fun both for you to execute and for your customers to experience.

What if you asked your customers to adopt the cause of helping abused or homeless women get out of shelters and into jobs? You can tap into the emotions of their own personal journeys to success with a campaign on the theme of “Remember when . . . ,” such as “Remember when you were just starting out and people said you couldn’t, wouldn’t, or shouldn’t, but you proved them wrong by becoming the successful businesswoman you are today?”

Your campaign could go on to invite women to “adopt a woman” just starting her journey to success like you did at one point in your life. You could ask your customers to donate a small amount every month for clothing items that you donate to the woman they have adopted (anonymously so privacy is maintained, of course) or to women in shelters in their community.

You could even host donation days where you invite customers to come in and donate old items at your retail outlets and get 20 percent off any new items they buy. You’d be building a community among “people just like them” and helping others find joy by doing good in the world — a powerful way to bond with ­customers and communities.

A campaign like this shows guerilla marketing at its best because it not only involves customers and surprises them with a new idea, but it also takes them away from considering the competition as you’ve given them a strong emotional reason to stay loyal to you.

Your marketing plan is not just a guidebook for getting your product out to the world and making money; it’s about creating an experience, event, and outcome that makes people’s lives better or more enjoyable and brings people together for the better. When you deliver emotional fulfillment and build a community around the value you deliver, it’s difficult to fail.