Business Coaching: How to Give Feedback Verbally

By: Marty Brounstein and
Updated: 03-26-2016
From The Book: Coaching and Mentoring For Dummies

Coaching and Mentoring For Dummies 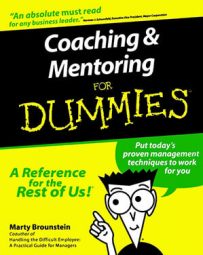 A skilled manager is also a business coach who knows how to verbally deliver constructive feedback. The phrasing and tone of your verbal feedback is important, because how you say something often carries more weight than what you have to say. Ideally, feedback is given by talking live to the employee — either face-to-face or by phone when you physically can't be together.

Marty Brounstein, is an author, speaker, and management consultant who specializes in practical applications of coaching techniques.