What Is Employee Engagement?

By: Bob Kelleher and
Updated: 03-26-2016
From The Book: Employee Engagement For Dummies 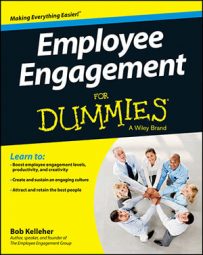 If you’re interested in learning about employee engagement, it’s probably because something's not quite right at work. People talk about leaving as soon as the economy improves. They no longer speak well of the company to each other or to potential recruits. It's as though people are just getting through the day, the week, or the month — that they're only there for the paycheck.

There's a growing sense among employees that they've become easily replaceable commodities — or, worse, that their positions could simply be eliminated to “save payroll.”

Or maybe things aren't so dire — people don't seem to be complaining, but your organization or department just lacks oomph. No one seems to be putting in the extra effort. Your colleagues seem to run out the door at quitting time.

Does any of this sound familiar? If so, what you're witnessing is a lack of engagement among employees. And you're not alone. In recent years, companies all over the world have seen employees tune out.

Whether due to the changing global economy, job instability, changes in the world of work, changes in society as a whole, or any number of other reasons, this lack of employee engagement is a serious problem for businesses and workers alike!

A 2013 report released by Gallup, titled “State of the American Workplace Report,” concludes that only 30 percent of workers are engaged, 52 percent are disengaged, and 18 percent are actively disengaged.

Author Mark Crowley of Fast Company likens the workforce to a crew team. On this team, three of the rowers are paddling like crazy, five are casually taking in the scenery, and two are actively trying to sink the boat. Obviously, this team will not win the regatta!

It's not just Americans whose boats are sinking, so to speak. A 2013 survey on engagement by Dale Carnegie Training found that, globally, 34 percent of workers are engaged, 48 percent are disengaged, and 18 percent are actively disengaged.

Fortunately, lack of engagement is a problem that you can solve. You can take any number of steps to engage your employees.

Other definitions or descriptions you're likely to hear include the following:

One super definition, though, is:

Although engagement is about capturing your employees’ discretionary effort, it isn't based on workaholism!

Bob Kelleher is the founder of The Employee Engagement Group, a global consulting firm that works with leadership teams to implement best-in-class leadership and employee engagement programs. He is the author of Louder Than Words and Creativeship, as well as a thought leader, keynote speaker, and consultant.