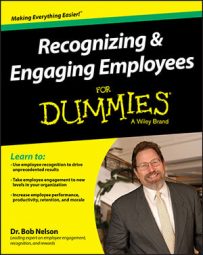 All the individual recognition mistakes can also apply to teams, yet recognizing teams provides some additional challenges as well. What makes team recognition especially difficult (and more prone to misfires) is that determining who on any given team is truly performing and who is slacking off can be difficult.

If you give a nonperformer the same reward as a high performer, you risk invalidating the recognition in the eyes of the members of the team. And if you fail to recognize the team stars, you risk alienating them. Read on for some other recognition mistakes that often arise with groups.

Treating everyone the same

Also called "jellybean motivation," this strategy fails to differentiate between the deserving and those merely riding the productive team members' coattails. Guess who best knows who on the team is not performing? The members of the team.

By rewarding everyone on a team equally — say with public recognition or a team bonus — when some people clearly did not perform up to the standards of the rest of the group, you risk losing credibility in the eyes of the high performers, precisely those you can least afford to alienate. Worse yet is to give more work to the team member who does good work, while allowing a nonperformer more time because he or she didn't finish an assignment.

If you don't have a close working knowledge about the work the team is doing, you can solicit individual feedback from team members: Query the group about their efforts working together and ask who contributed the most to the team results and who contributed the least. You can then use this information to provide added recognition to those that are most deserving.

Leaving someone deserving out

Say you recognize a team but notice one of the employees seems surly or hurt. What happened? Sometimes when a group is recognized, individuals are left out, either inadvertently or perhaps because group membership has changed. Sometimes, only the manager gets credit for the entire group's work, which can be especially demotivating to the group. It's up to you to ensure that everyone who contributes to the success of a team effort is recognized for his or her contributions.

Again, the best way to know who deserves recognition is to be up to date on the group, its efforts, and successes. At the very least, being updated on the group's latest membership helps you avoid praising individuals that may no longer be on the team and missing new members who have been added.

Failing to involve the group in determining recognition and rewards

Too often, groups are not allowed any say in how they'd like to be thanked. As a result, the thanks can miss the mark completely. By involving the team in deciding how to recognize or reward the team's success, the recognition will likely be more motivating and meaningful to the group.

A team leader in a chemical plant wanted to thank her project team for work they had done, so she purchased T-shirts for team members. Their response: "We saved the company all this money, and all we get is this lousy T-shirt?!" The manager, smart enough to use the incident as a learning opportunity, asked the team, "What would have been more motivating?" The manager made amends by doing something else for the team.