By: Richard Mosley and
Updated: 04-10-2017
From The Book: Employer Branding For Dummies 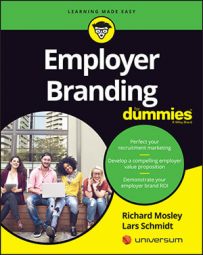 Explore Book Buy On Amazon
Spotting generic plays in employer branding strategies and opportunities to be different involves identifying common patterns of communication — words, phrases, and images that crop up with noticeable frequency across your competitive set. Patterns tend to be particularly obvious within industries where companies often reach the same “route one” conclusions about what will attract target talent, with noticeable examples of companies that stand out from the crowd.

Spotting similarities in employer branding across your industry

The first place to start is spotting similar headlines. For example, global companies, particularly financial institutions, have made frequent use of the phrase world of opportunities. Over the course of the last five years, we’ve noted more than 30 leading global companies using this very same headline, making it possibly the most generic employer brand headline of all. Among tech companies with a more missionary zeal to change the world, a similarly common headline is making a difference or making an impact. Likewise, pharmaceutical companies commonly use the phrase improving lives.

Another approach is to pay attention to the underlying narrative structure of the brand promise, where the words used may be slightly different but the overall pattern is very similar. For example, a recent analysis of how major engineering employers in the oil, gas, and automotive industries described their employment offer revealed the following generic pattern.

Although these employment pitches are not necessarily weak in isolation, they represent opportunities for other companies to stand out from the crowd by deploying more distinctive and unique phrases and patterns of communication.

As you identify similarities among your talent competitors, look for opportunities to be more distinctive in addition to identifying attractive attributes that may be missing from your competitors’ employer brand marketing.

Alongside your analysis of how your competitors present their EVP and tell their story, take a look at how they present themselves visually. We’ve found that most markets follow very similar visual codes, as in the following examples: These images all make sense in the context of their industry sectors. However, from a communications perspective, they give little indication of the individual character of the organizations they represent. As for the narrative positioning, when you understand the visual codes of the market you’re in, you can consciously decide to follow the code or find a way to present your company that stands out from the crowd and highlights what makes you special.

In the financial services market, Deutsche Bank decided on a visual presentation that made it a clear outlier from a visual point of view. Instead of the classic “rule of four” diversity team photo, Deutsche Bank’s global career page featured bright splashes of color and a row of clothes hooks. This communicated a similar diversity message to many of its global competitors, but in a far more expressive and imaginative way. The employer brand tagline was “agile thinking,” and use of this alternative image neatly demonstrated that claim.

One note of caution in exploring visual presentation is to bear in mind current levels of familiarity with your employer brand and your existing brand image. If your brand isn’t particularly well known, you may need to stick closer to the standard (expected) visual codes in the marketplace to establish what marketers refer to as your category membership.

Richard Mosley, Universum's Global Head of Strategy, is widely recognized as a leading global authority on the subject of employer branding. He regularly chairs or delivers keynote presentations at many of the world's leading employer brand events.
Lars Schmidt, Founder of Amplify Talent and Cofounder of HR Open Source, is a leading strategy consultant, speaker, and writer in the fields of employer branding and recruiting.