How to Evaluate Your Performance Management System

By: Herman Aguinis and
Updated: 09-27-2019
From The Book: Performance Management For Dummies 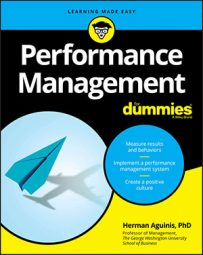 Also, after the system is in place, you will find it useful to collect data to see what is working and what is not. You can use this information to make fixes where needed.

In the pilot test of the system, you implement the system in its entirety from beginning to end, including all the steps that would be included if the system is fully implemented. In other words, meetings take place between supervisor and employee, performance data are gathered, developmental plans are designed, and feedback is provided.

The most important aspect of the pilot test is that all participants maintain records, noting any difficulties they encounter, ranging from problems with the appraisal form to how performance is measured to the quality and usefulness of feedback received.

The pilot test allows for the identification and early correction of any flaws before the system is implemented throughout the organization.

Reasons for doing a pilot test

The pilot test allows you to gain information from the perspective of the system’s users on how well the system works, to learn about any difficulties and unforeseen obstacles, to collect recommendations on how to improve all aspects of the system, and to understand personal reactions to it.

Also, conducting a pilot test is yet another way to achieve early acceptance from a group of people, those involved in the pilot test, who can then act as champions for the performance management system.

Participants in the pilot test can help you “sell” the performance management system to the rest of the organization. In this way, the system is not seen as owned by the HR function, but by the entire organization.

A final reason for conducting a pilot test is that end users are likely to have a higher system acceptance rate, knowing that stakeholders in the company had a say in its design, rather than feeling that the system was created by the HR department alone.

Don’t assume that the performance management system will necessarily be executed as planned or that it will produce the anticipated results.

In larger organizations, it's important to select the right group of employees for the pilot test. In choosing this group, you need to understand that the managers who will be participating should be willing to invest the resources, including time, needed to do the pilot test.

The pilot test group should be made up of managers who are flexible and willing to try new things. Also, make sure managers receive a realistic preview about what the system looks like and before they decide whether to participate in the pilot test.

In selecting the group, make sure the group is sufficiently large and representative of the entire organization so that reactions from the group will be generalizable to the rest of the organization. So in selecting the group, select jobs that are similar to those throughout the company, and the group selected is not an exception in either a positive or a negative way. In other words, the group should not be regarded as particularly unique in terms of its productivity or anything else.

At The Gap, Inc., they chose to pilot test their revamped performance management system in a representative store because it is a self-contained business unit.

Pilot tests provide crucial information to be used in improving the system before it is actually put in place. Pilot testing the system provides huge savings and identify potential problems before they become irreversible and the credibility of the system is ruined permanently.

Ongoing monitoring and evaluation of the performance management system

When the testing period is over and the performance management system has been implemented organization-wide, it is important to use clear measurements to monitor and evaluate that things are working as expected.

What to measure in your performance management system

Evaluation data should include reactions to the system and assessments of the system’s operational and technical requirements.

For example, you can administer a confidential survey to all employees, asking about perceptions and attitudes regarding the system. This survey can be administered during the initial stages of implementation and then at the end of the first review cycle to find out if there have been any changes.

Also, regarding the system’s results, you can measure performance ratings over time to see what positive effects the implementation of the system is having.

Finally, you can also interview key stakeholders, including managers and employees who have been involved in developing and implementing the performance management system.

How to measure your performance management system

These are good measures you can use on a regular basis to monitor and evaluate the system:

Don’t expect results as soon as the system is implemented; however, you will start to see some tangible results at the unit level a few months after the system is in place.

Herman Aguinis, PhD, is the Avram Tucker Distinguished Scholar and Professor of Management at The George Washington University School of Business in Washington, DC. He's been ranked among the top 100 most prolific and influential business and economics researchers in the world.