How to Create Rewards and Levels in a Gamification Program

Creating rewards and levels in a gamification program is conceptually simple: You specify the gameplay behavior you want to reward, define any rules associated with the behavior (or behaviors), and then indicate what reward corresponds to that behavior. You’ll also want to associate an image with the reward.

There are various types of gameplay rewards: recognition, status, and monetary. These might be further categorized as tangible (monetary) and virtual (recognition and status). If the behavior you want to reward is an advanced behavior rather than a simple one, you can configure various properties as needed.

A simple gameplay behavior is one that doesn’t require additional qualifiers to describe. Examples of simple behaviors might include commenting or responding to a customer inquiry. An advanced gameplay behavior is a simple behavior with one or more qualifiers. Advanced behaviors might include commenting on an article about fashion or responding to a customer inquiry within 30 minutes of receiving it.

For example, you might set the following properties regarding rewards in a gamified site:

The figure shows the creation of an advanced behavior using a gamification provider’s interface. 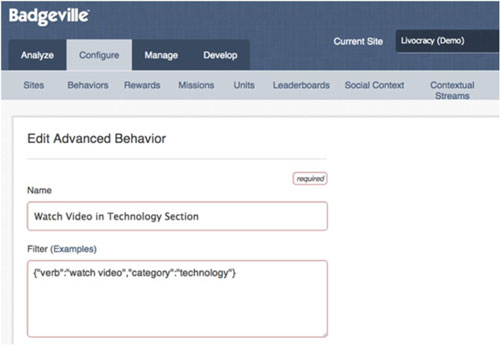 To create a level, you define a name, a starting point value, an image, a hint, and a message — for example, “Congratulations! You’re really making a name for yourself. Don’t stop now; you’ve got room to grow!”