The Economic Relationship between Quantity Sold and Prices

Wow! Holding everything else constant, even the dog’s waggley tail? Not quite, but holding things like income, customer preferences, and the price of other goods — say cats — constant. (Are cats a good?)

So quite simply, demand tells you how much customers purchase at each possible price.

How to distinguish between quantity demanded and demand

On the other hand, demand refers to the entire curve. Demand shows how much is purchased at every possible price.

Demand is an equation or line on a graph that indicates how price and quantity demanded are related.

How to graph demand

On the other hand, if the price of treats decreases, say, to $1.00 a box, the quantity demanded of treats increases to 250 boxes a week. 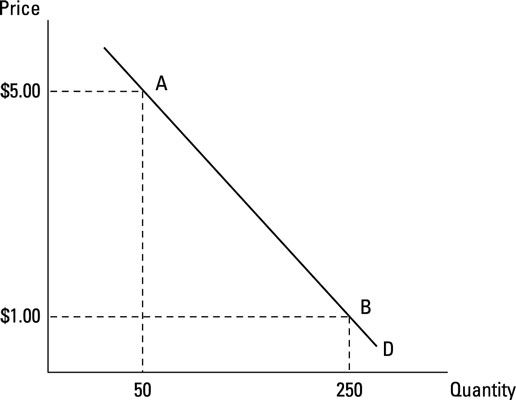 A shift of the demand curve

When one of the things being held constant — income, tastes, and the prices of other goods — changes, the entire demand curve shifts. For example, advertisements indicate that treats lead to happy dogs. People want happy dogs, so their preference for treats changes; dog treats become more desirable. So more dog treats are purchased, even though nothing happened to the price of dog treats.

Because the desirability of dog treats increases, stores are selling a lot more dog treats. Stores were previously selling 250 boxes of treats per week at a price of $1.00. Now, with the price still $1.00, stores are selling more treats — 350 boxes a week. That point isn’t on the original demand. 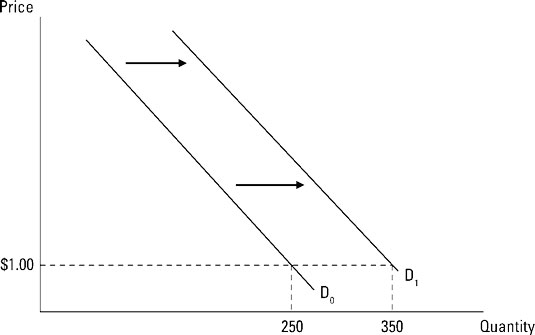 The increase in demand as the curve shifts from D0 to D1.

The factors that shift the entire demand curve are