In many games, one player chooses before another, and it’s difficult to know who has the advantage. In macro-economic models of business situations, if you move first, your rival may be able to neutralize your decision by moving second. You need to develop a decision-making rule that helps you anticipate your rival’s decision.

Decision-makers use backward induction in sequential games. Backward induction means that you develop your decision by looking at the future, or at how the game ends. Consider the decision tree in the illustration. Two car dealers, Cathy’s Cars and Otto’s Autos, must decide whether to raise, lower, or charge the same price on their used cars.

Because of her leadership position in the market, Cathy’s Cars chooses her used car price first, and then Otto’s Autos follows. When establishing her price, Cathy needs to consider how Otto responds by using backward induction. Using backward induction requires the following steps. Decision-makers start at the end of the game.

Decision-makers continue working backward from the last decision, taking into account the likely decision made at each step in the sequence, until the first step — the initial decision step — is reached. The illustration shows the backward induction process. 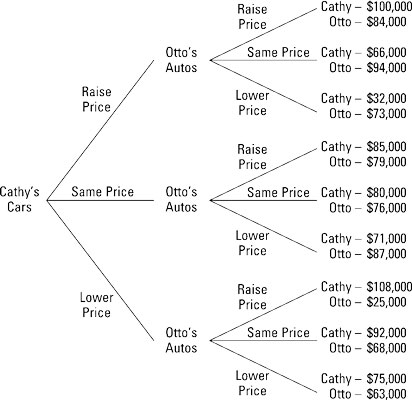 The illustration summarizes the various outcomes that are possible in the situation. The far left starts with Cathy’s possible choices — she can raise price, charge the same price, or lower price. In the middle, Otto’s choices are portrayed for each possible choice Cathy can make. At the far right are the annual profits each dealer receives given their combined choices.

By using backward induction to anticipate Otto’s response to her decision, Cathy is able to choose the best possible action.