How to Analyze Risk Preferences in Managerial Economics

Utility is a subjective measure of satisfaction that’s unique to an individual. A utility function is an index or scale that measures the relative utility of various outcomes. Economists use utils to measure the amount of an individual’s satisfaction. The concept of utility enables individual risk preferences to be incorporated in decision-making criteria.

How to construct a utility function

where U($) represents the utility associated with that payoff and P and (1 – P) represent probabilities.

Take the following steps to construct a utility function: 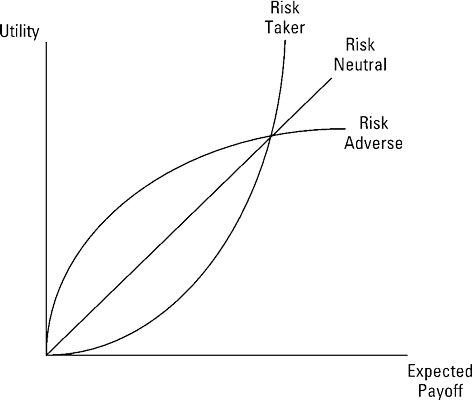 How to use the expected utility criterion

After you determine the utilities, you maximize a decision’s expected utility. Expected utility equals the sum of each possible outcome’s utility multiplied by the probability of the outcome occurring.

where the expected utility of action aj, E(utility aj), equals the summation for all states of nature of the utility associated with the payoff corresponding to action aj and state of nature èi, U(ðij), multiplied by the probability of state of nature èi occurring, P(èi).

You want to determine whether to expand your business or maintain its current size. The resulting payoff depends on the action you take and whether or not the economy goes into a recession. The illustration shows the resulting payoff matrix with annual profit in millions of dollars. 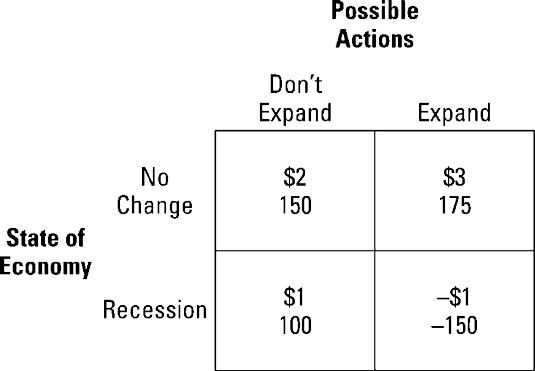 To determine which action to take based upon the expected utility criterion, you take the following steps:

Major advantages of the expected utility criterion include its incorporation of all possible outcomes and the probability of an outcome occurring. In addition, the reliance on utility enables you to incorporate risk preferences in the decision-making process.

The primary disadvantage associated with this criterion is its reliance on a subjective measure. Risk preferences and utility functions vary from individual to individual; therefore, it’s impossible to make comparisons between different people.