How to Adjust to Long-Run Profit Elimination in a Monopoly

According to the theories of managerial economics, easy entry and exit indicate that firms have little or no difficulty in moving into and out of a monopolistically competitive market. If firms perceive an opportunity to earn economic profit in this market, they enter the market.

The entry of new firms results in demand decreasing for other firms in the market as some customers switch to the new firm. Entry continues until the typical firm’s demand decreases to the point where the firm earns zero economic profit. At that point, new firms no longer have incentive to enter.

Similarly, if initial economic losses (negative economic profit) exist, firms leave the market. This loss of firms results in an increase in demand for firms remaining in the market until zero economic profit is reached. Demand increases for remaining firms as customers for the firms that left switch to surviving firms.

The illustration shows the movement to the long-run equilibrium from an initial situation with positive economic profit. Initially, the firm’s demand and marginal revenue curves correspond to d* and MR*. Given these curves and the illustrated cost curves, the profit-maximizing quantity and price are q* and p*. The firm is earning positive profit because price is greater than average total cost at q*. 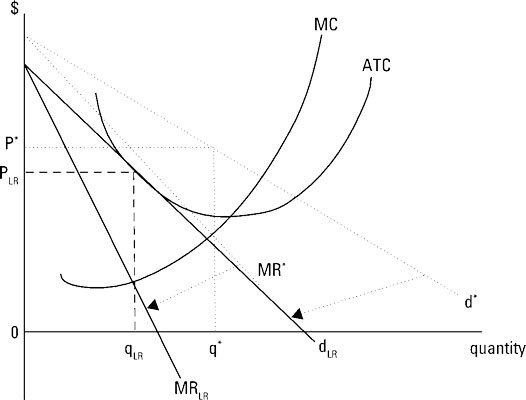 Because the firm is earning positive economic profit, new firms enter the market. The entry of new firms causes the original firm’s demand to decrease to dLR as some of the firm’s customers switch to the new firms. The decrease in demand causes marginal revenue to decrease to MRLR. The resulting new profit-maximizing quantity is qLR and price is pLR.

The determination of economic profit includes all costs associated with the good’s production, including the opportunity cost of resources contributed by the firm’s owner. Zero economic profit indicates that the firm’s owner is receiving exactly as much as the owner would receive in the next best alternative. In other words, the owner is receiving a normal rate of return.