Basics of Externalities in Managerial Economics

Negative externalities result in social costs that are higher than the actual costs the firm pays. As a consequence, firms produce a larger quantity of output than is socially optimal. Government regulation attempts to internalize those costs for the firm, resulting in production decisions that represent true resource costs.

The illustration shows a perfectly competitive market. If there are no externalities, the equilibrium output level, QE, corresponding to the intersection of the demand and market supply curves, represents the socially optimal output level. 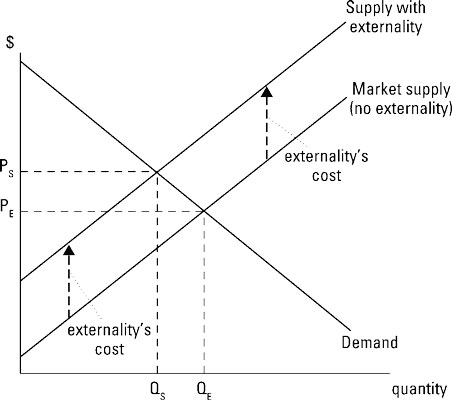 However, when pollution or another negative externality is present, the market supply curve doesn’t represent the good’s true production cost. The true cost is now represented by the supply curve that includes the externality.

Assuming the demand curve remains the same, the market’s socially optimal output level is QS corresponding to the intersection of demand and the supply curve with externality. The corresponding price consumers pay to cover the full cost of production is PS.

The purpose of government regulation is to reduce the market output from QE to the socially optimal level, QS. In order to accomplish this goal, government must internalize the cost of the negative externality for the firm. This is accomplished through various methods, such as fines, regulations requiring different production techniques, or taxes.

Commodity demand describes the relationship between the good’s quantity demanded and the price consumers are willing and able to pay for the good. Therefore, price represents the value of an additional unit of the good to consumers. However, if other individuals receive benefits — even though they aren’t part of the market transaction — those benefits aren’t included in the demand curve the firm faces.

Honey is an example of a good with positive externalities. The market demand for honey is based upon the price individuals are willing to pay to consume the product. However, the bees that produce honey also pollinate flowers and other plants. The beekeeper doesn’t receive any compensation for this benefit.

If the beekeeper did receive compensation, the beekeeper may be inclined to have more bees, leading to greater plant pollination, as well as more honey.

The illustration below shows a perfectly competitive market with a positive externality. If there are no externalities, the equilibrium output level, QE, and price, PE, corresponding to the intersection of the market demand curve and supply curve represents the socially optimal output level. 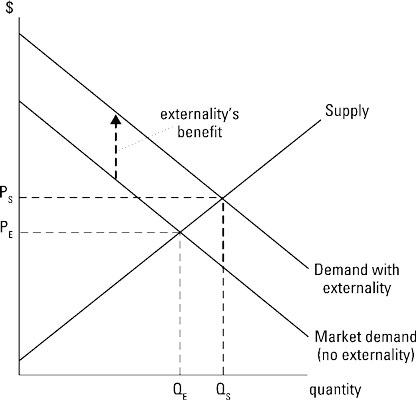 Government intervention seeks to increase the market output to the socially optimal level. In order to accomplish this task, government may subsidize the producer to reflect the positive externality.

In the case of honey, government may place a tax on plants and seeds and use the tax revenue to pay beekeepers a subsidy based on how many beehives they have. With the subsidy, beekeepers have an incentive to have more hives and bees.