By: Natalie Canavor and
Updated: 04-26-2017
From The Book: Business Writing For Dummies, 2nd Edition 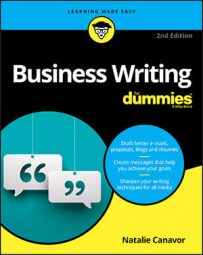 Explore Book Buy On Amazon
If you're writing to an individual or group of people you don't know personally, who do you see when you imagine your audience? Someone with communication skills a lot like yours? It's natural to assume most people are a lot like us. That's often a mistake, particularly when you're trying to establish a business relationship with people in other countries or creating a website to build international business.

Keep in mind that people born into another culture may speak English very well, but their writing and reading skills in the language typically lag behind. It's especially hard to write an adopted language. Fortunately, the principles of good business writing come to your aid to help you bridge differences in culture, language, and educational level.

Here are some of the guidelines that especially apply. Take them into account on an everyday level, too, if your workplace (like most today) is multicultural, or you want to reach prospective clients whose English language skills are limited.

Will this approach make your writing more boring? It may, but clarity comes first. And remember that nothing is so complex that it cannot be expressed in simple language.

In addition to writing style, consider cultural preferences when you communicate across borders. American business English style is seen as too casual for people in many other parts of the world, though this is changing as younger generations predominate. Meanwhile it is smart to observe more formal conventions—such as using people's titles and last names rather than first names when you write--if you want to elicit good responses. And be scrupulously courteous. This is never taken amiss.

When it's important to successfully engage businesspeople or potential customers in another country, take the trouble to know what the specific culture expects. Writing to someone in France or Japan or Russia suggests quite different protocols. Ideally, find someone from the specific culture conversant with its business customs and language to advise you.