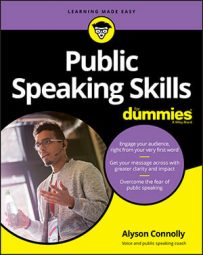 Explore Book Buy On Amazon
Upspeak is a high rise in intonation at the end of a sentence that makes it end up sounding like a question. Upspeak perhaps reached its height in the “Valley girl” talk of the 1980s, partly due to Frank Zappa’s hit song, “Valley Girl.”

Upspeak tends to creep into people’s speech now and then due to habit and mimicking others, or when they’re not feeling confident. Some of my clients who speak English as a second language (ESL) use upspeak. It’s as if they’re asking you if what they are saying is correct? Sometimes people say every sentence as if it were a question? Like you’re reading this now? Even if it’s not a question, but actually a statement? Like for instance? The car is blue? The truck is, like, red?

It’s exhausting even writing that way. And unfortunately, once again, women tend to use upspeak more. A study that analyzed the answers given in the game show Jeopardy! revealed that women who answered the question correctly used upspeak in their answer 48 percent of the time, whereas men used it in 27 percent of their correct answers. (I know, seems like a weird study; you’re supposed to answer Jeopardy! questions in the form of a question.)

Know why we upspeak

For men or women, upspeak is just one of those habits we pick up from people speaking around us, from popular entertainment and media, or when we’re not sure if the words we’re saying are correct, as in my ESL clients. But upspeak tends to make you sound not confident and monotonous.

If you encounter someone who is asking a question with everything he’s saying, you might start to think that person isn’t too confident. Whether it’s true or not, people who speak with upspeak sound like they’re looking for approval from those they’re conversing with. And it’s really tough to sustain a conversation with someone like that.

I find that upspeak comes out a lot during public speaking, especially when people are unsure they’ll get the type of reception they’re hoping for. Just the fact that they aren’t confident with themselves speaking can bring it out.

Upspeak is also monotonous to listen to. Hearing people speak can be boring if they’re using the same intonation the whole time. People crave variety when listening. Even if the topic is compelling, the monotony of upspeak may overwhelm everything else.

Exercise: Get rid of that question mark in your voice

It’s time to gain the confidence to lose upspeak once and for all. Question intonation is now for questions only, okay? All statements will now be declarative statements. How do you do that? Well, by saying statements like they should be said, over and over.

Take a piece of ruled paper and on each line, write a statement — something true about yourself. You can write what kind of shirt you’re wearing, one describing your style of pants, and so on. When you look out the window, what’s the weather like? Get down at least a dozen of these. Better yet, fill up the paper. Now, read them one by one to yourself. These are mundane things. Truths! You’re wearing a blue shirt; no one can dispute that. Listen to how you’re saying these statements. At the end of the sentence your pitch should sound a tad lower than the previous word, but not so low that you can’t hear that final word. In all likelihood, you’ve lost any upspeak altogether. You’ve become conscious of your intonation.

The following exercise “Getting rid of that question mark in your voice” can help you lose your intonation, but in a real speech you probably won’t be talking about the color of your shirt. You’ll need to take your speech and get rid of any question asking there, too. Write every line of your speech on a separate line of a piece of paper, just as you do with the random truths you write for the exercise. You should see a similar structure: barely any questions.

Find a chair and stand in front of it, but don’t sit down yet. Say a line of your speech out loud. Think of each line as an individual statement rather than a part of a larger work. Sit down firmly on the chair at the end of the line. This can help drop your pitch, which is what should happen at the end of a sentence. Sound better?

Need some more inspiration? Try reading a children’s book if you have one handy. Take out your favorite Dr. Seuss, for example, and read it out loud. Children’s books are typically full of plain, simple statements. Aphorisms are easy on the ears of kids and may just retrain you, too. Our lives are complex things, and our language often reflects that complexity, but when you have a short amount of time to convince someone of something, it’s a good idea to turn that nuanced reasoning into pure, cold, statements.