By: Christina Tangora Schlachter and
Updated: 03-26-2016
From The Book: Critical Conversations For Dummies

Critical conversation skills can help you address a myriad of problems, including conflict. Like any good critical conversation, a conversation designed to help resolve conflict should follow a common process: examine the issue, options, and ideas; decide on solutions; and then get moving and evaluate the results of the conversation.

During staff disputes, the parties involved often need to spend more time appreciating others’ points of view. Although appreciating others’ feelings is part of other critical conversations, when you’re dealing with conflict, this step can’t be ignored or hidden within other agreements during conflict resolution. 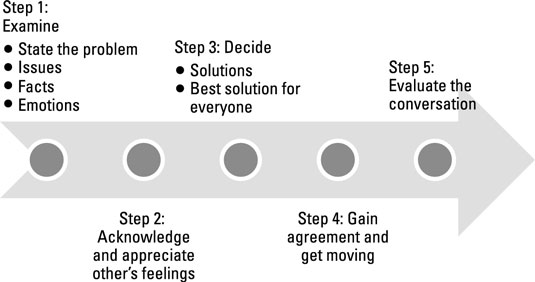 Here’s how the five steps break down:

Identify the cause of the conflict

Right after stating your own feelings, use an objective, non-confrontational statement to state why you feel this way. Just as in other critical conversations, this links a fact (what the other person is doing or saying), to a consequence (how it is making you feel). Be sure to:

Appreciate the other person’s point of view

Often, conflict arises when people feel that their feelings and ideas aren’t being heard. Whether you’re the facilitator, initiator, or a party having the critical conversation, when parties disagree, that disagreement is often tied to another person’s ego.

Before moving on to the next step, ask whether everyone is willing to work together to resolve the issue. Think of this mutual agreement as a baby step toward solving the problem.

Decide on a solution most acceptable to everyone

If a staff dispute is out of control or if the parties have significant disagreements that may never be fully resolved, an alternative to 100 percent agreement is 100 percent acceptance. Although the conversation may not end with everyone going off into the sunset and working happily ever after together, the conflict can end with all parties being able to live with and support the decision and next steps.

Gain commitment to get moving

When you’re resolving conflict, especially staff conflict, action needs to be quick after the conversation ends. Because most staff conflicts are based on emotions, you want to see an immediate change (within 24 to 48 hours) in behavior.

If you don’t see change that quickly, the parties in the conversation may start wondering if change will ever happen, which can start an entirely new set of emotions and conflict in the workplace. If actions need to take place, put together an action plan to make sure the decisions made during the conversation happen.

Evaluate results after the conversation

Evaluating the results of whether or not Sally and Jim like each other more or can agree to work together may not be as clear as asking an employee to improve sales performance or client retention, but it can and should be done. Simply say, “Let’s check in next week and see how these decisions are working,” and then check in a week later.

Christina Tangora Schlachter, PhD, is a Certified Professional Coach. She has created and taught courses on communication skills, crucial conversations for new managers, communication for professionals, and dealing with difficult conversations. She is the coauthor of Leading Business Change For Dummies and is the Chief Leader of She Leads.