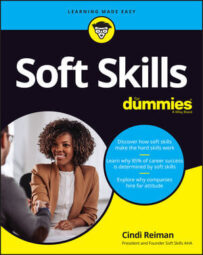 Explore Book Buy On Amazon
Understanding and being open to people from different cultural backgrounds is an important soft skill in today's workplace, and an attribute employers look for in job candidates.

Even when you know that celebrating diversity is important to your personal and professional success, you may sometimes struggle to accept the diversity you encounter, and gravitate toward people who are most like you and provide a sense of familiarity. You may not even be aware that you’re doing so, but you’re not alone.

During childhood, people are conditioned by their experiences and environments to seek out what’s the same and to avoid what’s different. Each person is raised to view and to react to the world around them in certain ways, and these unique differences shape a person’s appearance, language, and behavior.

These differences — along with cultural beliefs, traditions, and religion — shape people's views of themselves, others, and the world, which is why learning to understand and accept other cultures can sometimes be difficult.

Because you look at people from another culture through your “me” filter, you may need to work to learn how to see and accept something or someone in a different way.

Accepting that seeing is not always believing

You probably believe that you see things as they truly are. However, your mind interprets what your eyes see and gives those things meaning. In other words, what you see is as much in your mind as it is in reality.

Any behavior observed across the cultural divide has to be interpreted two ways:

Understanding interpretation is an important part of cultivating cultural awareness, so here’s a quick exercise to make the concept a little easier to understand:

Read the following five behavior scenarios and write your immediate interpretation of that behavior in terms of your own cultural values, beliefs, or perceptions. Don’t give your responses too much thought. Just write what immediately comes to mind.

Your personal interpretation of each situation determined where your mind went as you were reading each of these situational sentences. For example, you may have read item 4 and thought that the person was giving you a sign of encouragement or approval. However, in some Middle Eastern countries, giving someone a thumbs-up gesture sends the same message as raising a different finger in the United States. (Yep. That one.)

After you understand and accept that interpretations are a personal matter, you can begin to cultivate tolerance and respect for others who see things differently than you do.

Saying no to stereotyping

Fostering the ability to understand, embrace, and respect the differences you see in others is critical to your success in the workplace and in life. One of the first and most significant steps in the process is to admit that you have personal biases, prejudices, and the tendency to apply stereotypes to others.

Prejudice is being down on something you’re not up on.

Stereotyping is the practice of assuming that similar people or groups of people think, act, look, feel, and believe the same things simply because they share the same culture. When you stereotype people, you prejudge them.

Stereotyping tends to dehumanize people by lumping them all together. And no one wants that. Every person wants to be seen for who they are as an individual. Feeling negative about a certain person or avoiding a certain group of people simply because they’re different from you can minimize your worldview and affect your ability to work well with others.

You may believe that you always treat others you meet as equals, but this ideal probably isn’t true at times, and you may not even realize you’re violating it. According to stereotyping studies, most people have biases and prejudices they aren’t even aware of that can have a major influence on the way they interact with others.

Stepping on the stereotyping scale

The first step to avoiding unconscious stereotyping behaviors is to identify the ways you may be practicing stereotyping. Grab your pen and paper and write your first thought that completes the following statements: Take a look at your responses. Did they come easily to you? If so, you may have a tendency to stereotype the people you meet at work and in life. Were most of your responses positive or negative? If they were mostly negative, you may have a tendency to be prejudiced and biased when meeting someone new and different from you.

Any sentence about people that begins with the word all is stereotypical from the start.

Recognizing how you stereotype

Education is the key to change, and right here and now is a great opportunity to start educating yourself. After you begin to recognize your biases, prejudices, and tendency to stereotype, you can use your newly acquired knowledge to develop and practice a culture of tolerance, acceptance, and celebration both in the workplace and in life.

The power of daily active practice, practice, practice improves your diversity and cultural awareness skills and leads to career and life success. Employers want to hire and promote people who work well with others.

Use the following three simple exercises for daily practice in respecting diversity and developing cultural awareness:

Differences will always exist. Diversity will always be a part of the workplace and life. And that’s a good thing! All you have to do to learn how to respect diversity and cultivate cultural awareness is to remember that your mind is like a parachute: It works best when it’s open.

Cindi Reiman is the President and Founder of the American Hospitality Academy (AHA), a company that has been providing leadership training and internships since 1986. AHA created Soft Skills AHA, which provides curriculums and professional development programs focusing on career readiness and the essential employability traits needed to be successful both in the workplace, and in life.