The Role of Probability in Analyzing Financial Data

By: Michael Taillard and
Updated: 03-26-2016
From The Book: Corporate Finance For Dummies

Just because it lands on heads 100 times in a row doesn’t mean the coin has a better chance of landing on tails: On flip 101, you still have a 50 percent probability that it will land on tails. (A lot of gamblers get stuck in that trap.)

When you apply probability theory to the standard deviation, you end up with something called a normal distribution. 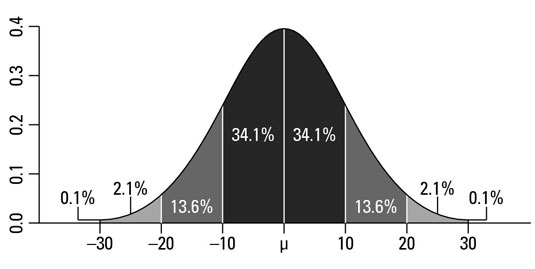 So, why on Earth do you care about normal distribution? You care because probability calculations are used frequently in financial forecasts. Say that you want to predict the most probable percentage drop in the stock market as a result of an increase in interest rates.

By collecting historical data and determining the mean and standard deviations, you can estimate the likely range to any percentage of probability you like. You might say that the stock market has a 68 percent probability of dropping by 1 to 2 percent or a 95 percent probability that it will drop between 0.8 to 2.2 percent.

The more certain you want to be, the wider your range is going to be because you have to account for a greater range of data that encompasses a particular level of probability.

This equation says that in order to calculate the probability of thing A happening conditionally of thing B, you take the following steps:

In other words, if there is a 68 percent chance of the stock market decreasing by 1 to 2 percent (thing B) and only a 50 percent chance of a stock price drop happening without B (thing A), but a 95 percent probability that interest rates will rise given a stock price drop, then you can calculate the total probability of your stock dropping like this:

The probability that a drop in stock price given a drop in the market occurs is 70 percent.