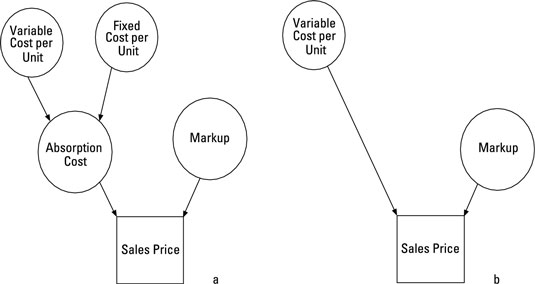 How to work out variable-cost pricing

Suppose that Sparl Industries makes the Red Rover model. The entire production run of Red Rover requires $900,000 worth of fixed costs. Each unit costs another $90,000 in variable costs. Sparl wants to earn $400,000 in profit on the production and sale of 20 units of this model.

First, figure out how much markup you need on each unit to cover both the desired profit and the fixed costs:

The markup is $65,000 per unit. Now set the price at this planned markup plus the variable cost:

Avoid the hazards of variable-cost pricing

If your hotel has vacancies (read: excess capacity) and a customer walks in without a reservation, offering to pay $52 for a room for the night, variable-cost pricing indicates you should take the guy in. After all, $52 exceeds the variable cost of $10, increasing your profits by $42. (Cost-plus pricing tells you to throw the customer out.

Each room costs $100/night. Why would you willingly lose $48?) But if your hotel is completely booked, the only way to house the $52 customer would be to throw a full-price-paying customer out on the street, reducing revenue.

Variable-cost pricing poses another severe danger: To earn a profit, your sales must exceed costs. Because variable-cost pricing doesn’t fully account for fixed costs, it can trick managers into setting prices so low that they hurt profits, or worse yet, cause net losses.

Occasionally selling a room for $52 may increase your profits. However, selling too many rooms at such low prices (even if you’re never at full capacity) will cause you to lose a lot of money.