By: Maire Loughran and
Updated: 03-26-2016
From The Book: Intermediate Accounting For Dummies 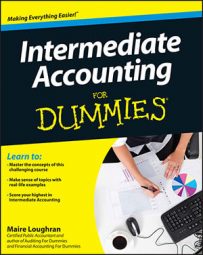 Depreciation is the method of allocating costs to the appropriate period. Although accountants have to follow generally accepted accounting principles (GAAP) for financial statement reporting purposes, they have different allowable methods to consider.

Depreciation isn’t part of the whole equation for figuring the fair market value, which is the amount of money the company may fetch when it sells any of the assets.

Your intermediate accounting textbook discusses a few different methods of depreciation. Three are based on time: straight-line, declining-balance, and sum-of-the-years’ digits. The last, units-of-production, is based on actual physical usage of the fixed asset. Here’s a brief explanation of each:

Psssst — just a quick word on two special methods: group and composite. Using one depreciation rate across the board, a company uses the group method when the assets are similar and have a similar expected life. And, companies use the composite method when assets are dissimilar and have different lives. These methods aren’t allowed for tax and are used in only very special circumstances for GAAP.

Don’t deduct salvage value when figuring the depreciable base for the declining balance method. But do limit depreciation so that, at the end of the day, the asset’s net book value is the same as its estimated salvage value.

To use the double declining-balance method shown in the figure, the multiplier is 2, so the double-declining rate is 40 percent (20% x 2).

Units-of-production is an activity method because you compute depreciation on actual physical use, making it a fantastic method for computing factory machinery depreciation.

In addition to knowing the cost basis and estimating the salvage value, you need to estimate how many outer shells the machine can produce prior to retirement. The best estimate for Mr. Toaster-Maker is 60,000 units. Taking cost minus salvage value gives you $27,000. Divide $27,000 by your anticipated usage of 60,000 units ($27,000 / 60,000), which equals $0.45. This is your unit-of-production depreciation rate.

Checking the math, you know you can’t depreciate past salvage value, so adding all five years of depreciation expense equals $27,000. Yippee, 100 percent correct!

Maire Loughran is a certified public accountant who has prepared compilation, review, and audit reports for fifteen years. A member of the American Institute of Certified Public Accountants, she is a full adjunct professor who teaches graduate and undergraduate auditing and accounting classes.