How to Measure the Covariance and Correlation of Data Samples

A sample is a randomly chosen selection of elements from an underlying population.

Here's what each element in this equation means:

The sample covariance may have any positive or negative value.

The formula used to compute the sample correlation coefficient ensures that its value ranges between –1 and 1.

For example, suppose you take a sample of stock returns from the Excelsior Corporation and the Adirondack Corporation from the years 2008 to 2012, as shown here:

This table shows the remaining calculations for the sample covariance: 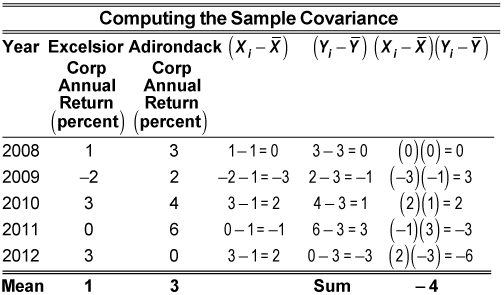 In the table, the

column represents the differences between each return to Excelsior in the sample and the sample mean; similarly, the

column represents the same calculations for Adirondack. The entries in the

column equal the product of the entries in the previous two columns. The sum of the

column gives the numerator in the sample covariance formula:

The denominator equals the sample size minus one, which is 5 – 1 = 4. (Both samples have five elements, n = 5.) Therefore, the sample covariance equals 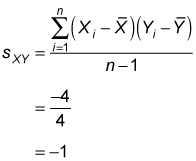 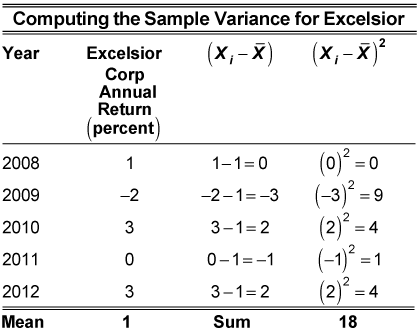 In the table, the

column represents the differences between each return to Excelsior in the sample and the sample mean; the

column represents the squared difference between each return to Excelsior and the sample mean. The sum of the

The sample standard deviation of X is the square root of 4.5, or

The table shows the calculations for the sample variance of Y. 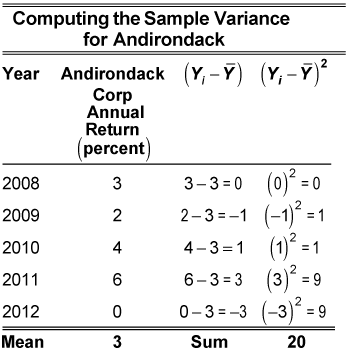 Based on the calculations in the table, the sample variance of Y equals

The sample standard deviation of Y equals the square root of 5, or

Substituting these values into the sample correlation formula gives you