Explore Book Buy On Amazon
The traditional, or intelligent, haunting is perhaps the most widely accepted kind of ghostly activity, although it is not as common as many might think. In this kind of case, the spirit or entity involved is an intelligent or interactive presence in a haunted location. It is there because of a connection to the site or to the people at the location. 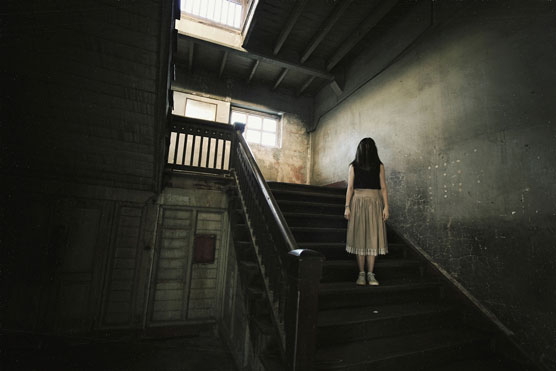 ©By ARTFULLY PHOTOGRAPHER/Shutterstock.com
A traditional haunting.

Most intelligent spirits will manifest in physical ways to try to interact with those at the location:

On rare occasions, the spirit will be seen, and when it is, it will most likely look as it did when alive.

This ghost is most simply described as the personality, or consciousness, of a person who once lived and has stayed behind in our world instead of passing on at the time of death. This may happen in the case of murder, a traumatic event, a suicide, or even because of some unfinished business in the person’s life. At the time of death, the spirit refused to move on because of these events. The spirits may also linger because of emotions that tie them to the Earth, from anger to love. In other cases, there is the chance that the spirit didn’t even realize they had died. This may occur when a death is sudden or unexpected, like with an accident or a murder.

These spirits now consist of the energy that once made up the personality of a living person. Now that the human body is gone, that energy is all that remains. These interactive spirits can be benign or very negative. This might be explained by the fact that they are the personalities of people who were angry or bitter in life. This often explains the types of activity (or behavior) being exhibited at the haunted location. The spirits are simply human personalities and seem to retain the same traits they had when alive. If a person was kind and caring in life, the spirit will be a benevolent one. On the other hand, if that person was angry or cruel, those qualities are likely to manifest.

These negative spirits can be frightening and, in rare cases, can actually harm the living. This is generally not the case, though, and most injuries related to haunted houses occur because of physical objects that are moved or when someone injures himself in an accident because of their fear of the phenomena.

In the case of the intelligent entity, the variety of phenomena can include knocking and tapping sounds, noises with no logical cause, disturbance of stationary objects, doors slamming, lights turning on and off, and much more. The ghost tends to manifest itself in physical ways, including cold chills and smells. It usually seems to want to bring attention to itself, and such cases can literally drag on for years at a time.

As a ghost hunter, you can deal with this kind of haunting in several ways. Because some of these spirits have remained behind because of some sort of incomplete business, it is a hard obstacle to overcome. The spirits may have remained in this world because they have relatives or loved ones that have been left behind. Or they may have left unfinished tasks that they feel cannot be completed by anyone else. They may not rest because of some injustice that was done to them or perhaps because of something as simple as wanting to be around to see their children grow up.

It is worth noting is that the annoyance factor in a case like this will be high. It is likely that the spirit will attempt to get the attention of the living occupants of the location. These spirits can be known for hiding objects, moving things about, turning things on and off, and other nuisances that can be compared to a child seeking attention. It is possible that the spirit may by looking for assistance to cross over or to accomplish a certain task. It has also been documented that the spirit may just be seeking the company of the residents or even the investigators in the case.

For the most part, the idea of these spirits remaining behind in this world is rather sad, if not tragic. In all our excitement over finding a ghost, we also must keep in mind that many spirits are confused over what has happened to them and may not even realize they are dead. Many of them may have died suddenly. Others may try to cling to life, afraid of letting go of the tangible, material world. Because of this, they are drawn back to places where they experienced joy, peace, and happiness in life. Many of these spirits may just feel too alive to want to pass on to the other side.

These ghosts sometimes need help to be convinced that they do not belong here anymore. They can be shown the right way and introduced to the idea that there is more for them in the next world than there remains for them in this one. There are many ways to approach this and, surprisingly, a number of people who are skilled in such matters. They accomplish their tasks in different ways, ranging from simple explanations to perhaps a prayer offered by a clergyman of the spirit’s faith.

While this sounds a lot like spiritualism, it isn’t. In such cases, we can historically verify the existence of the ghosts by connecting their current manifestations, and the rare instances when they are actually seen, to the time when they were among the living. We can take the witness accounts of the ghost and compare them to contemporary photographs or descriptions of the person the ghost is alleged to be. This is where history can literally make the case for us and connect a haunting to a person from the past.