Explore Book Buy On Amazon
Paranormal investigations are best conducted with a team of three to six people. This allows you to thoroughly investigate the entire location — without bumping into people from a large group — and to interview witnesses and record their statements without anyone feeling overwhelmed. A small group also allows you to avoid the distractions that arise and complicate investigations for researchers who work alone.

Working alone is only recommended if you have many years of experience, and even then, it is best to have others present or nearby for safety and to corroborate any strange things that may occur. On the other hand, a large group is merely pointless, especially in someone’s home, where things quickly become awkward and congested. 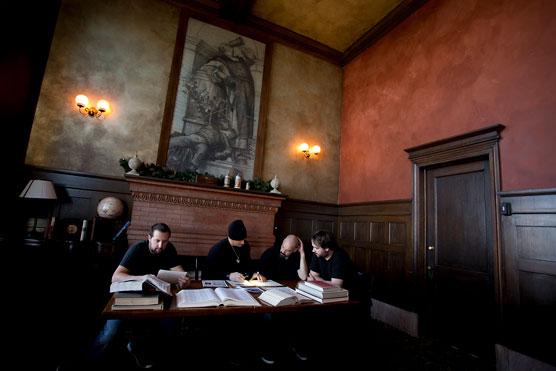 ©Travel Channel. Ghost Adventures team during an investigation.The following is a checklist guide for investigations. It is meant to be a list of helpful suggestions. Not every guideline works for every ghost hunter, so use what you can from the list and adapt it to work for your own investigations.

2. Divide up the separate functions of the investigation among the team members. Decide who will be handling each aspect: who will be photographing, who will be recording video, who will be using the available equipment, who will be in the nerve center, and so on.

3. Interview the witness in a secluded location with all the team members present.

Choose the team member who is the best interviewer to ask the questions. Be sure to ask what they know of the location’s history and ask them to share their experiences there. Has anything affected them negatively there? Do they believe anything has followed them from the location? These are only general questions. More specific questions are suggested later in this chapter.

Questions should be asked by one interviewer at a time, and the interview should be recorded on tape and if possible, video. One team member should take notes of everything that is said. Getting all the details of the case in this first interview is essential. The entire team should be aware of the history of the location. If an interaction with a spirit occurs, each team member can ask questions based on what they already know about the place. This helps the interaction to become more personal between the investigation and the conscious presence.

4. After the interview, the team leader should take the group on a walk-through of the location.

The tech manager and the nerve center monitor should use this time to determine where all the cameras should go. Particular attention should be paid to those areas where the witness recalled an experience or sighting or where anomalies have been picked up using detection equipment.

6. If the phenomenon occurs on a regular basis or has a set pattern, obtain permission from the witness to do surveillance of the area for an extended period. This is often referred to as a ghost watch, because it gets away from an active investigation and becomes more of a “watch and see” experience.

In these situations, researchers should come to the location, set up their monitoring equipment, and then wait to see what they can record. We have even been known to this as people sleep. Occasionally, witnesses tell us that the activity occurs only after they go to sleep, so we set up cameras to monitor them. During as episode of Ghost Adventures at Phelps-Dodge Hospital in Arizona, we interviewed a caretaker who told us that something touched him while he slept. We set up cameras, and he was right — we witnessed a presence touching his hand.

This type of investigation should be done when you are relatively sure that you cannot explain away the reports of the witnesses, or after your own investigations have turned up something beyond the ordinary.

7. If, when the investigation is over, you have turned up nothing, remember that this does not mean the location is not haunted. Even if you have tracked down all possible natural sources for the phenomena and ruled them out, the ghost could simply have been inactive while you were there. This is why follow-up calls and repeat visits are important.

You can’t go to a location where witnesses have documented activity on their own, stay there for three hours, and then state that the place isn’t haunted because nothing happened to you! Just because you showed up does not mean that the ghosts are ready to perform on command.

If you have established a good relationship with the witness, they will not mind hearing from you again. Be sure to ask them to call you if anything else happens, and make sure that they keep a record of it. If anything occurs, go back and conduct another investigation, varying your technique to maximum effect.