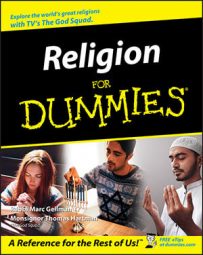 You don't necessarily have to pray and worship quietly. Many people communicate with God through noise and movement. Singing and chanting — otherwise known as letting your voices be heard — are part of the histories of most world religions. This "beautiful noise" often combines with movement such as dancing — ranging from the Native American Sun Dance to the Sufi whirling dervish — to create an experience that enables the participants to transcend beyond themselves. It's about letting go, giving yourself up to the divine ecstasy that is found in God's love. These actions are often part of the rites of passage found among most religions. Singing, chanting, dancing, and whirling can bring people together, part of the communal experience that unites people of faith.

At some point in your life, you've probably participated in — or witnessed — some religious celebration that involves the singing of religious songs. Songs and prayers have a close connection in scripture because some songs are prayers and some prayers are songs. Nearly all religions have some tradition, song, or chant, used as a part of prayer and worship.

Chanting crosses international boundaries. Among the Hindu religions, chanting dates back to ancient times. For Hindus, the chanting of the Rig-Veda and the Yajur Veda (created to be chanted by priests during sacrifices) is a methodical rearrangement of many of the verses of the Rig-Veda with the addition of prose. The chanting is based on various tones and syllables with a type of heightened speech and one syllable to a tone. Brahmin priests chant the Vedas during rites of passage, such as weddings and funerals.

Although Vedic chanting (as well as devotional songs called bhajans) has been a prominent part of the Hindu religious culture for countless generations (almost 3,000 years), in the twenty-first century, the majority of Vedic chanting is found in India. Today, the Hare Krishna movement is bringing many of the teachings of the ancient Hindu scriptures — primarily derived from the Bhagavad-Gita ("Song of the Lord") — into Western society.

In Japan, the Shinto faithful perform chants, known as norito, during rituals. These chants are part of the music Shinto worshippers offer the gods as praise and entertainment. Chanting Buddhist hymns is known as shomyo. In both Shinto and Buddhism, chanting enables adherents to participate in their own divine communication.

You can find chanting among the Western religions, too. In Judaism, you can find a wonderful example of the interweaving of singing and chanting into the religious experience. The hazzan, or cantor, directs all liturgical prayer and chanting when Jews come together in the synagogue. If no cantor is present, a skilled layperson, called the ba'al tefilah, chants the prayers, which the congregation then repeats. If you have the opportunity to visit a synagogue during prayer services, you can see for yourself the power of this rhythmic back and forth chanting of praise and devotion to God.

Chanting became part of the Roman Catholic Church during the days of Pope Gregory I (circa 590–604 B.C.E.). The Gregorian chant is the monophonic liturgical music of the Catholic Church; it was first used to accompany the text of the mass. The Gregorian chant has evolved over the centuries, becoming one of the many lyrical ways that Christian faithful offer praise or prayer to God.

Today, the music of the church includes both chants and songs, such as religious psalms. Psalm tone is the melodic recitation that is used in the singing of psalms and canticles (or text) of the Bible. Think of the psalm tone as a two-part formula that enables the faithful to use the proper intonation to express the feelings in their heart.

The Muslim Qari (professional class of reciters of the Qur'an) become so focused and impassioned in their recitation of the Qur'an that they appear to be "chanting" as they communicate with Allah. While singing is not permitted among the Muslim faithful, the chanting to Allah is viewed as a powerful form of prayer. The Qari seem to lose themselves in this form of prayer. This intoning or chanting of the Qur'an is known as tajwid.

Responsorial singing (style of singing in which a leader alternates with a chorus) is part of many Christian worship services. However, you can find this type of singing in traditions beyond Christianity, commonly among the folk music of many cultures, including the indigenous religions of the world.

Song and sound in indigenous religions

The combination of chanting and singing is present among the tribes of the North American nations, the thousands of African tribes, and the first peoples of Australia.

Many of the sacred songs, such as the ones sung by the Native Americans — such as the Hopi or the Zuni (from the Pueblo Nation) — are affiliated with rituals and rites of passage. Through these songs, worshipers ask the gods to listen to their pleas for rain, crops, and other elements needed for survival.

Many indigenous religions combine singing and chanting with dancing in order to create a highly energetic offering to the spirits. One of the most famous rituals was the Ghost Dance of Native American tribes in the western United States. Using music and dance, and performing the ritual over a period of four or five consecutive nights, Native Americans sought to rejuvenate their traditional cultures, oust the white man from the land, and return to their traditional way of life. The combination of song — actually, sounding like repeated chanting — and prayers ask for intervention from the divine. White Americans, blaming the Ghost Dance on Native American uprisings, outlawed its performance.

Movement is inextricably tied with the music and songs of prayer. Although some restrictions may be placed upon specific types of dancing — for example, in orthodox Judaism, men and women are not allowed to dance together, and during the Middle Ages, the Christian church didn't allow dancing (some groups, such as Southern Baptists, still prohibit dancing) — dancing remains popular throughout many religions today.

Dance is a form of celebration. If you've ever attended a Jewish wedding, you've probably witnessed the horah, a communal dance in which family and friends raise the bride and groom onto chairs to honor the unity of their love and their roles in perpetuating Judaism (with marriage comes the promise of children). Still, dance as part of religious rituals and rites of passage is most common in indigenous religions and in the religions and cultures of the Middle East:

People in Middle Eastern countries believe that the dervish goes so deeply into prayer that his body becomes open to receive the energy of God. Dervishes derive not only energy from Allah but also words and messages, which they transcribe and rehearse for others. According to Sufis, the dervish is considered an instrument of God, who retains God's power only during the solemn ceremony.

As the communities of the faithful continue to grow, the celebration of prayer through actions such as singing, chanting, dancing, and whirling will forever be part of the rituals and rites of passage of the world's religions.