How to Identify Overall Patterns on Your Astrological Birth Chart 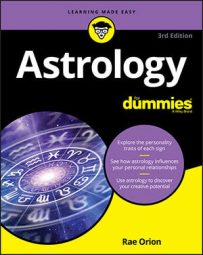 Explore Book Buy On Amazon
Leaf through a pile of birth charts, and you may notice that in some the planets are huddled together in one part of the circle, while in others they’re scattered around the wheel like numbers on a clock. These groupings can be revealing regardless of the signs and planets involved. Astrologers have developed two main ways of assessing the configurations of an astrological chart:

Both methods rely only on patterns, not on signs and planets.

A quick glance at your horoscope provides an easy entry into interpretation — and all you have to do is count. First locate the horizon line in your chart — the line running from the ascendant to the descendant, as shown. If seven or more planets are above the horizon, you’re an extrovert, who looks to the external world for recognition and endorsement. If most of your planets populate the area below the line, you’re an introvert, who needs privacy, seeks personal fulfillment, and may be uncomfortable in the limelight. 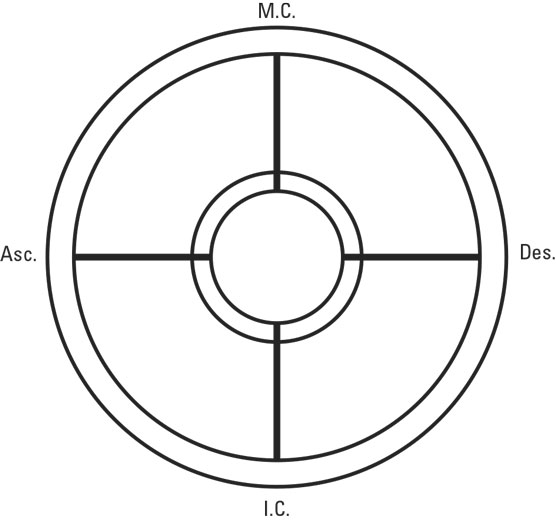 Dividing your chart by the horizon and the meridian

If most of your planets lie on the eastern or left side of the horoscope, you have the enviable ability to make things happen, to pave your own way. You’re highly independent, but you may also be intolerant of people who can’t seem to call the shots the way you can.

If your chart leans to the right, so to speak, with seven or more planets on the western or right side of the circle, you’re more dependent on circumstances than you may appear to be. You need to seize the moment when it arrives, and you may feel that you must bend to the demands of others in order to succeed.

Most of us have planets on both sides of divide, no matter which way you bisect the circle. But there are some people, including the greatest of the great, whose planets occupy only one hemisphere. Serena Williams, the most gifted female athlete on Earth, has all of her planets on the right side of her chart. That doesn’t in any way belittle her accomplishments. It merely suggests that she responds to circumstances and is adaptable. Not so with Beyoncé ― with every one of her planets on the left side of her chart, she is self-reliant and independent, a self-starter with a will of iron.

The ascendant symbolizes your surface personality. The descendant represents your approach to marriage and partnerships. The midheaven — the apex of your chart — describes your ambition and public image. At the bottom of your chart, the imum coeli, or I.C., indicates your attitude toward home and family.

In 1941, astrologer Marc Edmund Jones (a Libran) identified seven planetary patterns which, like hemispheric division, operate without regard to specific signs and planets. Ever since then, students of astrology have been exploring the meaning of those patterns. Here they are: 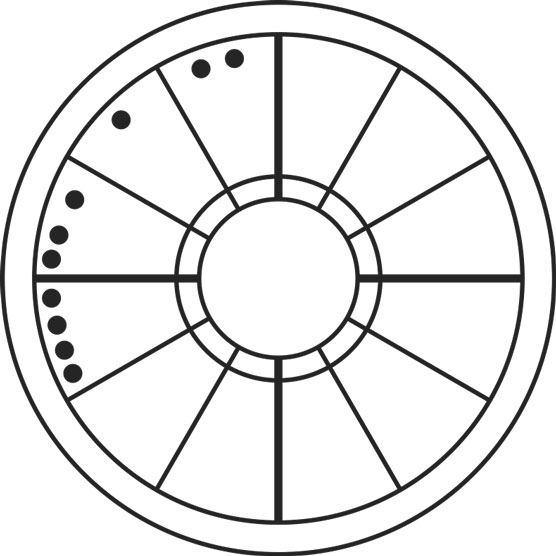 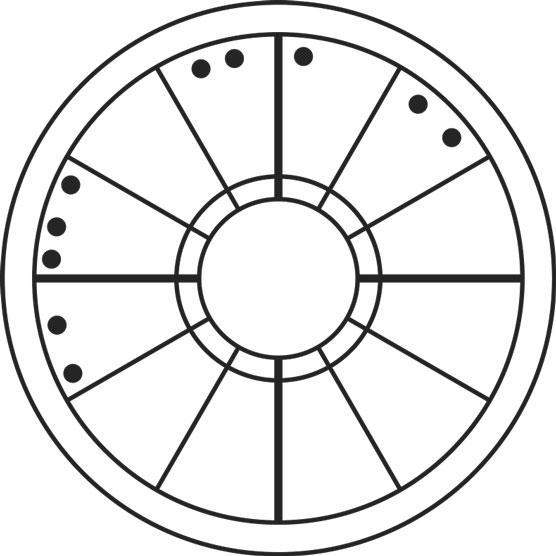 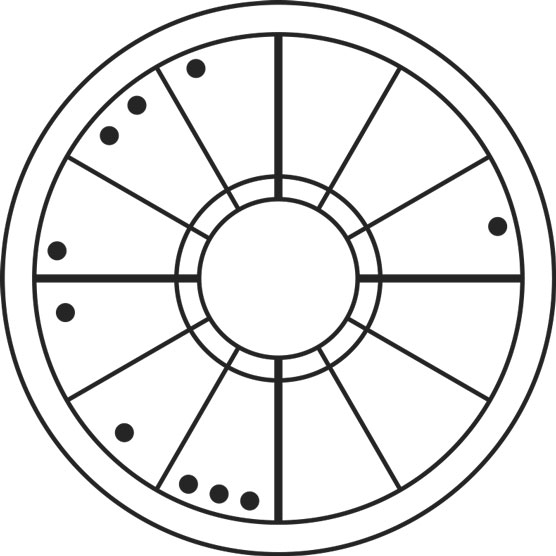 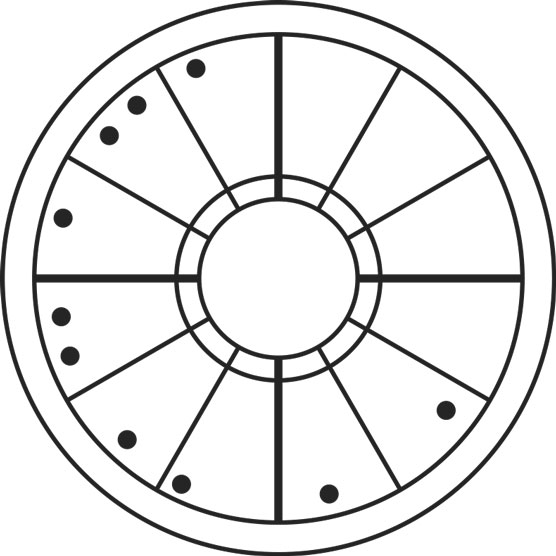 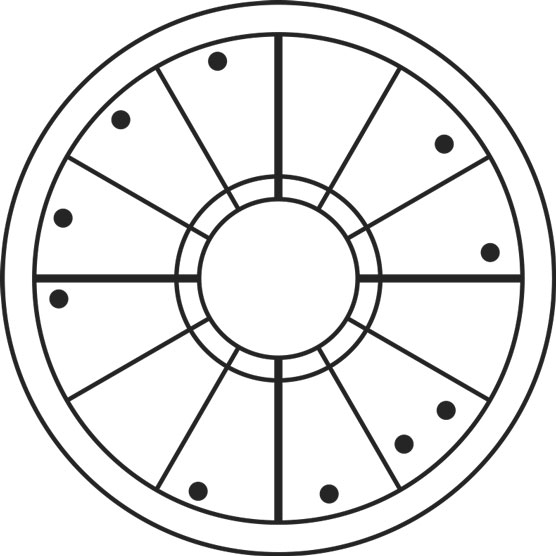 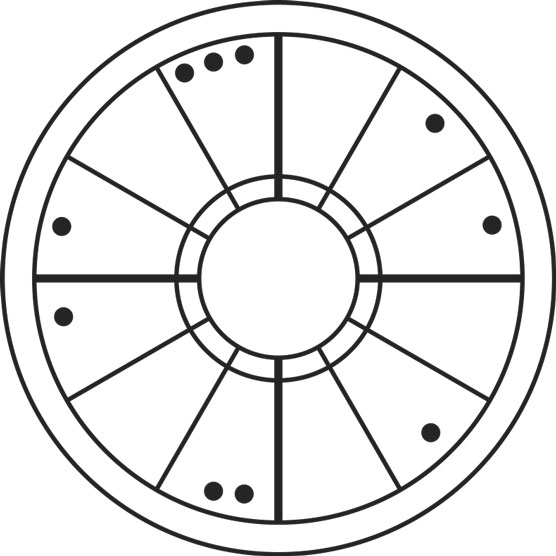 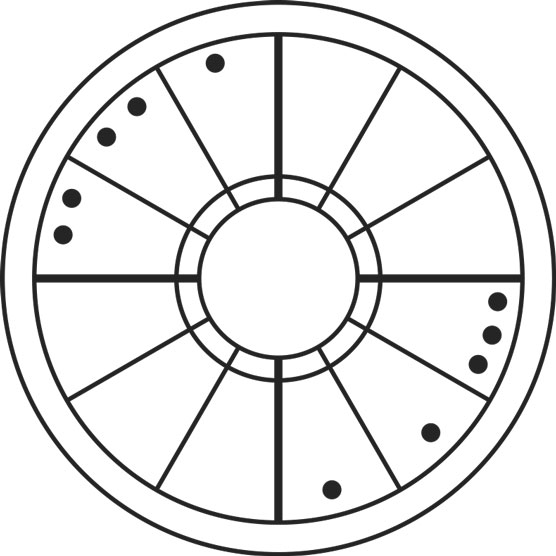 Be advised: these patterns are valuable aids to interpretation, but sometimes it’s hard to detect any pattern at all. When that happens, forget about finding the perfect label. Don’t think, don’t judge. Just take in the chart as the visual symbol of a soul. Just look.

After mulling over the patterns of hemispheric division and overall design in your chart, you’re ready to assess your chart according to element and mode. Begin by counting the planets in each element (fire, earth, air, and water) and in each mode (cardinal, fixed, and mutable). The following table shows you which is which. If you know the time of your birth, add your ascendant and midheaven for a total of 12 distinct components. Want to include the effects of Chiron (the comet)? Be my guest. But keep in mind that we’re still learning about it.

Most charts are more or less balanced, with two to four planets in each element. If you have five or more planets in signs of one element, the traits associated with that element are emphasized. See the following table for explanations of what such an abundance may mean for you.

When classifying the components of a chart, remember that the sun, moon, and ascendant are more influential than other placements and therefore deserve extra weight. Some astrologers even count them twice, just to make sure they get their due.

The modes (or qualities) work the same way as the elements. Most people have an approximate balance. But if you have a pileup of planets in one particular mode, those traits are accentuated. This table tells you more. There is one other possibility. What if you have nothing in one of the elements or modes? Here’s what it means when an element or a mode is missing.

Elemental voids can affect entire generations. For instance, between 1943 and 1955, Pluto was in Leo, a fire sign, and Neptune was in airy Libra. So, no one born during that those years has a void in either fire or air — which may be why baby boomers, say what you will about them, can’t be faulted for lack of energy (fire) or ideas (air). But among members of that generation, voids in water (emotional awareness) and earth (practicality) are common. Which makes a certain amount of sense.

During the 1960s, Neptune was in Scorpio and Pluto was in Virgo, so it was not possible to have a void in water or earth. But a baby born in those years could easily come up short in fire or air — or both, as was the case for Kurt Cobain. He had an astonishing eight planets in water signs plus two voids, one in fire and one in air: an emotional avalanche for anyone.

If you have an elemental void, here’s how it could affect you:

Missing in Action: Modes in retreat

Missing modes are less common than elemental voids. But they do occur. If you happen to have one, here’s how to interpret it:

How to find mitigating factors

Here’s the thing: Planets are not the only players. You might have a planetary void in, let’s say, water. But if the ascendant, midheaven, the nodes of the moon, or even Chiron is in a water sign, then that void is not total.

So maybe you have a void in water. But if you have planets in the fourth, eighth, or twelfth house – the houses that correspond to water signs – that alleviates the situation. Those house placements direct your attention in ways that can help balance a slightly out-of-whack chart. This is a subtle influence. But that doesn’t mean it’s not real.

To see this effect in action, take a look at Oprah Winfrey’s chart. She has very little earth in her chart — only Chiron and the north node of the moon. None of her planets inhabit earth signs. But she has three planets in the second house of money and possessions, one in the sixth house of work, and two in the tenth house of career and reputation. So, most of her planets are in the houses associated with earth signs, also known as the houses of substance — which might explain how an idealistic Aquarian got to be one of the richest women in the galaxy. 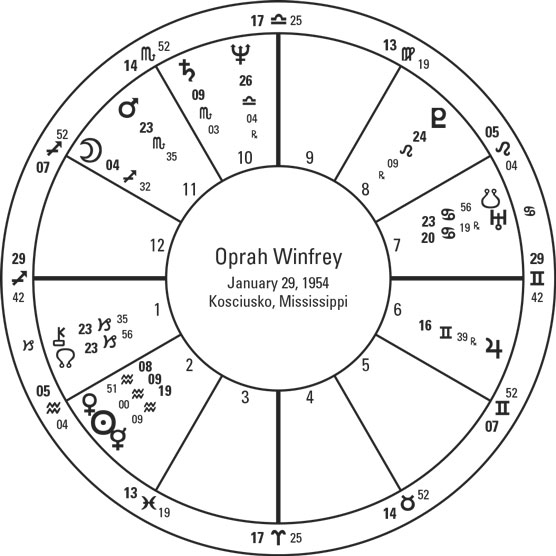 Oprah Winfrey's birth chart
Voids in cardinal, fixed, or mutable signs operate the same way. Let’s say you have nothing in Aries, Cancer, Libra, and Capricorn—not a planet, not an ascendant, not even a node. This cardinal void makes it hard to get a new enterprise into motion. But wait a second take a look at your chart. Is there anything in the angular houses, that is, houses one, four, seven, and ten? If so, you’re in better shape than you thought. Taking the initiative will never be your most outstanding quality. But when you need to step up, you will find the wherewithal you need.