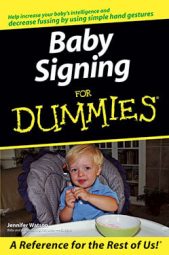 The reason babies don't speak isn't for lack of understanding. It's for lack of the ability to control the movements of the mouth and tongue that are necessary to produce intelligible, audible speech. Those movements are undeveloped until babies are older. However, at a much earlier age, babies can control the movements necessary to produce signs. And as a result of this ability, a world of two-way communication can be opened for babies and their caregivers.

Signing with babies provides many benefits. Consider these, for example:

Some folks worry that signing might delay their babies' speech. Rest assured, research has repeatedly proven that signing children actually begin to speak earlier and speak more often than their non-signing counterparts.

Jennifer Hill Watson is the mom to three signing children. She began signing with her first daughter when her daughter was about 6 months old. At 41?2 years, her oldest now has over 300 signs. Jennifer’s second daughter is nearing 300 signs at age 31?2. Her son has 116 signs and 154 words at 19 months.
A former teacher, Jennifer has taught in both private schools and Houston public schools. She teaches signing classes for babies and their parents in the Houston area and helps lead the Houston Signing Babies support group both on the Web and at regular meetings.
Jennifer also speaks at national conferences to teachers on using American Sign Language in the classroom. Jennifer works with McGraw-Hill/Wright Group’s Early Childhood Division as an Early Childhood Consultant and teacher trainer. She volunteers as director of a preschool choir and leads confirmation classes with sixth graders in her church.
She has a bachelor of science from Texas Wesleyan University in Fort Worth, Texas. Jennifer and her family currently live in Katy, Texas.