10 Genealogy Sites Worth a Visit

By: April Leigh Helm and Matthew L. Helm and
Updated: 10-29-2017
From The Book: Genealogy For Dummies 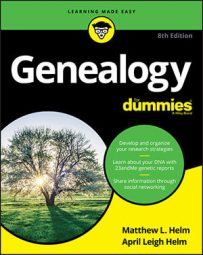 Explore Book Buy On Amazon
There are a lot of unique sites on the Web that could be useful to your genealogy research, or are interesting to check out, at the very least. The following sections describe just a few that might give you a new perspective on doing your family history research.

Some other key features of rootsfinder include hints from other online sites, a "Web Clipper" that copies data from genealogy sites directly into your tree (reducing transcription errors), and a nifty evidence analysis report that helps identify conflicting information. The online tree also has a Pinterest-like media wall and a video maker, allowing you to tell your family's story with narration and music.

The FamilySearch Help Center contains several resources to help with your research. The Center covers support for FamilySearch products, live research assistance from individuals with expertise in particular areas, getting started tutorials, a learning center with online courses, and the FamilySearch Research Wiki. With more than 85,000 articles related to genealogical research, the FamilySearch Research Wiki is an invaluable guide to assist you with your research. Whether you're looking for guidance on a specific locality, a type of record, or an ethnic group, or if you need general help with research, you should be able to find an applicable article. The site is set up like a typical wiki and is maintained by the genealogical community at large.

WeRelate started as a wiki developed jointly by the Foundation for On-Line Genealogy and the Allen County Public Library. It accepts contributions from the user community, mostly in the form of pages on specific ancestors. It claims to be the largest genealogy wiki with ancestor pages numbering more than 2,800,000.

The objective of kindex is to create a searchable archive of source material. You can add sources to kindex in two ways — through the kindex Add a Record screen or by adding a Memory from FamilySearch.org. After a record is added, you can transcribe the contents of the record using the index screen. After transcription, you can tag key pieces of information such as name, place, and date. When it's indexed, the record can be shared (if you desire) with a link or through social media. You can even print the record with a QR-code PDF for quick access.

Key resources available online can often be confusing to use. Stephen Morse's one-step tools offer time-saving shortcuts for getting the most out of these sites. Resources at the site include one-steps for:

Looking for photographs from 1935 to 1945? The Yale University Photogrammar site simplifies the search for photographs taken by the United States Farm Security Administration and the Office of War Information. The photographs chronicle life during the Great Depression and World War II. A searchable interactive map shows the geographic location for 90,000 photographs.

Story Corps is a collection of interviews of over 250,000 Americans who wanted to leave a legacy to the next generation. Projects included on the website focus on individuals with serious illnesses, youth with experience in the juvenile and adult justice system, stories of the lesbian, gay, bisexual, transgender, and queer (LGBTQ) community, and September 11th initiative.

The American Battle Monuments Commission is responsible for the care of overseas cemeteries and memorials honoring the United States Armed Forces. The website has information on the individual cemeteries and monuments and hosts a database of burials with the names of over 218,000 individuals buried at those sites. The database is a good place to check if you have an ancestor who "disappears" around the time of World War I or II. For the stateside equivalent, see the National Cemetery Administration Nationwide Gravesite Locator.

Atlas of the Historical Geography of the United States

A historical atlas can be a good tool to use to get context of the life of your ancestor. The Atlas of the Historical Geography of the United States displays nearly 700 maps from the atlas, first published in 1932. The maps are georectified — that is, they are warped so that they can be layered on top of a digital map. The site contains a variety of maps touching on topics such as:

Sometimes primary source information can be hard to find if it is housed in non-government archive. ArchiveGrid contains over 4,000,000 records of historical documents, personal papers, and family histories housed at more than 1,000 institutions. Also, on the site is a searchable map so that you can see what archives are physically close to an area that you are visiting.