By: Judith Silverstein and Michael Lasky and
Updated: 03-26-2016
From The Book: Online Dating For Dummies 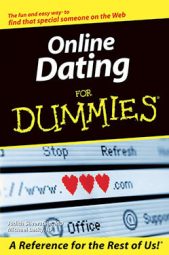 The Internet is a strange place, and what seems abnormal for in-person experiences is completely common on the Internet. Notice that the word is common, not polite or considerate.

You need to know how to dish out rejection in an appropriate way. As with real life, you must do it quickly — and with a modicum of kindness, if possible. Granted, for some people, a more heavy-handed approach is necessary. In general, give a rejection firmly. Polite is good, but if it doesn't work, try sterner and firmer. Anger doesn't help. If you need further coaching, go to your local electric company's customer service department and see how it handles you when you try to dispute a bill by saying, "I never used that electricity."

Many appropriate ways are available to encourage someone to move along. Each one requires its own special finesse. This article points out the major ways to do so in specific situations.

After receiving the very first e-mail from someone

Say that you get an e-mail from someone, and you can tell immediately that you have no interest in communicating with that person. Here are the Internet-appropriate ways to say no:

And for the record, the inappropriate ways to say no include

In the middle of an IM exchange

Say that you're in the middle of an Instant Messaging (IM) exchange, and you realize that the prospect just isn't a match. The Internet-appropriate action to take is to simply say
"I need to stop now. I've enjoyed chatting with you, but I don't think we're a match. I don't want to waste any more of your time. Best of luck in your search."

Wait for a reply. If it's an argument telling you why you are a match, simply sign off. Don't engage in further IMs. Block him or her if necessary.

And for the record, the inappropriate actions are

If someone has really incensed you, avoid further trouble even though you're anonymous. Resist the urge to "flame" people. They are unlikely to go postal on you, but some people are sufficiently sick to do some serious libel and slander. Some people flame others by sending e-mails, warning people of a person's supposed bad character. ("Don't date this guy. He is [insert issue here].") Although you could sue them for defamation, who needs the grief? The best way to avoid this sort of thing is to kill people with kindness, even if they don't deserve it.

In the midst of a phone call

Say that you're in the midst of a phone call with a prospect (after some e-mail exchanges), and you realize that he or she just isn't a match. The appropriate actions to take include

And for the record, avoid these inappropriate actions:

When people are clueless

Occasionally, you'll run into people who just won't stop contacting you even after you've rejected them. Most often, people don't let go because they've developed fantasies from your photo and essay. When you start exchanging messages, the fantasies grow. If you're still anonymous, the situation probably isn't dangerous, but you may still feel uncomfortable.

Spotting these people is tough because they seem so genuine and enthusiastic. So what's your No.1 warning sign? They express assumptions about the depth of your relationship with them long before it's appropriate.

When your goal is to make a clean break from the person who won't let go (or any prospect, for that matter), never argue or defend yourself. You have to accept the bad guy or girl role unless you want to create an even angrier person out of your former prospect.

Realize that many people forget how little time they actually have invested in their exchanges and that they don't have a good perspective on their circumstances.

If all else fails, let them down hard

When someone just won't quit bothering you and all else fails, you have to dispense with being polite. Just as dogs get only one bite (actually, they don't get any free bites), your discouraged suitor gets only one "apology" from you. Then it's over, babe.

The following line is pretty darn effective but only use it as a last resort:
"You need to know that if you attempt to contact me again, I'll report your activities as an abuse to the dating site. The site will then begin to monitor all your e-mail messages and kick you off the system if it doesn't like what you're writing."

Afterward, break off the communication. From then on, your approach is no reply, no comment, no nothing.

Your safety is paramount. If you think you have a problem prospect, even if you're anonymous, don't feel uncomfortable reporting the situation to the site operator (usually under abuse or Webmaster). The pay sites have a serious interest in protecting their customers and maintaining good public relations. If you do call for help, supply actual e-mails or other data giving the supporting facts.

Reporting abuse to the site is far more effective than just blocking a person's messages (a feature offered on most sites). However, if you're a drama king or queen, don't practice your art of "the sky is falling." If you fabricate e-mails and try to damage someone's reputation, you'll run foul of several civil and criminal laws — maybe even antiterrorism federal law. Remember that nothing is ever completely erased on the Internet, so made-up abuse is pretty easy to expose. And if you report inappropriately, the site will monitor your mail.

Judith Silverstein, MD, and Michael Lasky, JD, not only wrote this book together, but they actually found each other through online dating.