Pilates (pronounced puh-lah-teez and not pie-lates) is similar to yoga but emphasizes your body’s core — the abdomen, obliques, lower back, inner and outer thigh, butt, and so on. For this reason, Pilates develops much of what exercisers need — strength, flexibility, muscular endurance, coordination, balance, and good posture — with a much lower chance of injury than with other forms of exercise. The discipline emphasizes correct form instead of going for the burn. With so many exercise variations and progressions, you may have a hard time getting bored with Pilates.

Pilates moves require you to engage virtually your whole body. At times, you may try to strengthen one muscle while stretching another. The moves take lots of concentration; you can’t simply go through the motions like you can on gym equipment. And then, for every move you think you’ve mastered, Pilates has another version that’s a little different and a little harder.

Consider a move called rolling like a ball: You balance on your rear end, roll backward, and then roll back up into the balanced position again. This move requires a good balance of abdominal and lower-back strength and is deceptively tough. Pilates teaches you to think about how you use your muscles during your workout so you use them better in daily life. For instance, because much of the focus is on good posture and body mechanics, you stand and sit taller and walk more gracefully. 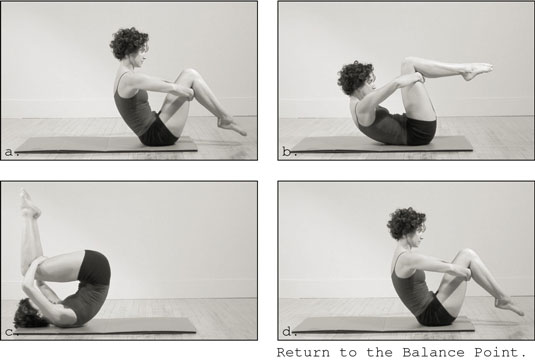 Credit: Photograph by David Herman and Jordan Levy
The "rolling like a ball" move in Pilates.

Here's a bit of trivia: Pilates is named after its inventor, Joseph Pilates, a former carpenter and gymnast who invented the exercise for injured dancers. Many of the moves were inspired by yoga or patterned after the movements of zoo animals such as swans, seals, and big cats.