Chagas is known as the kissing disease because the infection is usually transmitted from the bite of an insect called a Triatominae, also known as a kissing bug, which likes to feed on a warm blooded animal’s face while it is sleeping. (This includes more than 150 species of mammal — even humans — yikes!) 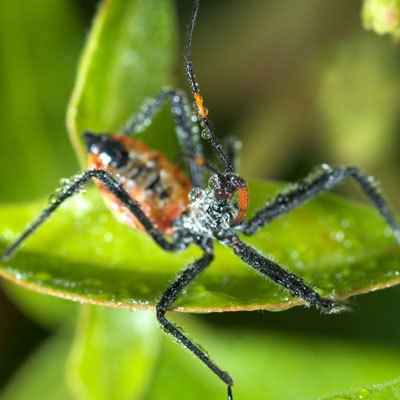 Chagas is actually caused by a sub-tropical protozoan parasite, Trypanosoma Cruzi (T. Cruzi.) This parasite enters the blood stream of its host and starts the duplication process, eventually infecting every cell of the host’s body with parasitic protozoa replicates. Often the host shows no signs of infection until between 10 and 30 years later when the chronic phase of the disease becomes apparent.

Chagas disease was named after Dr. Carlos Chagas who discovered the blood parasite in 1909. The disease was not recognized or considered a health threat by the United States until the mid-1960s. Chagas disease is localized mainly in Mexico and Central and South America. The reports of infection outbreak in the United States and Europe are usually caught and treated in the early stages of development.

Don't confuse Chagas with mononucleosis (mono), the "kissing disease" that plagues many high schools and is contracted by puckering up with your honey.

The nature of the disease’s transmission can vary greatly. The method of Chagas transmission is listed here by percentage of people infected:

The symptoms of Chagas in humans

The symptoms of Chagas change over time as the infection slowly spreads through the whole body. At the beginning of the infection (the acute phase), people usually show no signs or only mild symptoms of fever, sluggishness, headaches, swollen glands, loss of appetite, diarrhea, and redness/swelling at the site of entry to the body.

After 2–3 months of being infected without treatment, someone with Chagas disease will enter the chronic phase. Some chronic symptoms include speech impairment, confusion, and loss of balance, which often occurs because of the severe brain swelling associated with Chagas disease.

The risks of Chagas going untreated or undiagnosed

People who enter the chronic phase of the disease without treatment will either become asymptomatic, never showing any signs of further symptoms, or they will develop devastating health issues decades after the initial symptoms occurred. These chronic health issues include severe inflammation in the esophagus, colon, lungs, glands, kidneys, brain, and heart. Other symptoms can occur as well, typically resulting in heart failure and eventually death!

The chronic symptoms affect roughly only 30 percent of those who are infected with T. Cruzi. Essentially the disease can be compared to an allergic reaction, in which the parasitic protozoa that has infiltrated the infected person's body acts as the allergen.

Treatment and recovery options available for those infected

Since the symptoms of Chagas and the reproduction cycle is similar to that of HIV, the treatment is similar as well. Anti-parasitic drugs such as Benznidazole and DNA vaccine immunotherapies are most effective during the acute phase of the illness and lead to a cure in about 85 percent of those infected.

During the chronic phase, however, immunotherapies and anti-parasitic drugs have shown to only slow the onset of the disease but not completely eradicate it from the infected person's body. Sadly, for many people that are already in the chronic stages of Chagas disease, there is no cure, and treatment involves managing all symptoms as they occur, such as organ transplantation surgery, stem cell therapy, and the use of immunosuppression drugs like Cyclosporin.

The importance of preventing Chagas

Since no vaccines have been developed to stop the spread of Chagas disease, roughly 8 million people worldwide are infected with the parasite, and about 13,000 deaths a year occur due to complications of the disease in its chronic state.

Preventative measures have to be taken to ensure a lower risk of infection including decreasing the number of insects who carry the parasite as well as early blood screening tests for people who live or travel inside infected areas.

If you are travelling in countries where the Triatominae (kissing bug) is known to live and bite, be sure to follow these steps to minimize your chances of contracting Chagas disease:

Some promising vaccines are currently in development providing positive test results in other mammals infected with Chagas and are awaiting approval for human clinical trials.