By: Barry Fox and Nadine Taylor and Jinoos Yazdany and
Updated: 03-26-2016
From The Book: Arthritis For Dummies 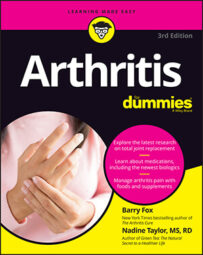 The idea that food can cause or relieve arthritis isn't new. More than 200 years ago, English doctors prescribed cod-liver oil to treat gout and rheumatism. More recently, some health writers have insisted that arthritics should eat or not eat specific foods. The debate is in full swing. Do certain foods cause arthritis? Is there an "Arthritis Begone" diet? All the evidence isn't yet in, but thanks to the studies currently available, more and more physicians are convinced that diet plays a valuable role in arthritis treatment plans.

Which fruits, vegetables, meat, or fish should you eat? There are no absolute rules, but the results of studies and case histories suggest that these foods may be helpful:

Fat is considered a boogey-man. This substance causes heart disease, and it contributes to obesity, cancer, and a host of other ills. You're told to cut the fat off your meat and out of your diet. However, certain kinds of fat, specifically the omega-3 and one type of omega-6 fatty acids, can be aids against arthritis.

Likewise, you can get omega-3s through supplements. If you use a supplement, make sure that it clearly lists the amount of DHA and EPA per capsule. There is no RDA for fish oil: Some authorities suggest taking 3 grams of DHA and/or EPA per day.

Take supplements only after discussing them with your physician. In addition, make sure your doctor always knows what supplements you are taking, for they may interfere with certain aspects of treatment.

Omega-3 fatty acids have some long, complicated names such as alpha-linolenic acid, DHA (docosahexaenoic acid), and EPA (eicosapentaenoic acid). They're often referred to as omega-3s or fish oil, for short, because that's where you typically find them in their most concentrated form.

Taking fish oil and GLA (gamma linolenic acid) thins the blood, which can be dangerous if pushed too far. Overly thin blood may not clot properly, causing bleeding to increase to dangerous levels. Consult a physician before taking fish oil supplements if you take blood-thinning medication, NSAIDs, supplements that contain ginger, or anything else that thins the blood.

Don't deep-fry your fish. Doing so destroys the omega-3s.

Although most of the omega-6s are best avoided, one of them gives hope to arthritis patients: gamma-linolenic acid, or GLA for short. Several studies have shown that GLA helps reduce pain and inflammation in RA patients, and it may also help with other forms of arthritis.

You won't find large amounts of GLA in food. In addition to evening primrose oil, good sources of GLA include borage oil and black currant oil. An often-suggested dose is 1 to 2 grams of GLA per day. Make sure that the primrose oil or other product you purchase lists the GLA content on the label so you know exactly how many capsules or spoonfuls you need to take to get the desired dosage. You can purchase evening primrose oil, borage oil, and black currant oil in health food stores.