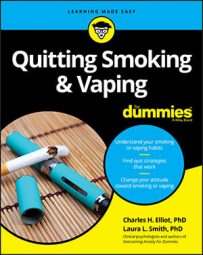 Explore Book Buy On Amazon
It’s important that consumers purchase their e-liquids (often referred to as vapor) from reputable sources because the accuracy of ingredients listed on labels has been a problem. This problem should resolve in the near future; the U.S. Food and Drug Administration (FDA) is in the process of implementing more regulatory authority for e-cigarettes and their contents.

All vaping devices contain a liquid which turns into aerosol when heated. Terms for this liquid include

Many of the ingredients found in e-liquids are, by themselves, probably of low toxicity. However, when they’re mixed together and heated, new chemicals can emerge. We simply don’t know how toxic these brews are or become when stored over time. Considerable research will be needed to answer these questions. 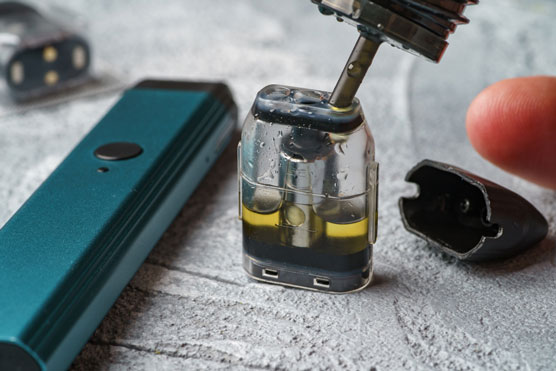 As a small beginning, ingredients should be listed on the label. Almost all e-liquids contain some combination of the following:

Depending on individual tastes for flavor, throat hit, and amount of vapor, different proportions of vegetable glycerin and propylene glycol can be mixed for e-liquids.

When people quit smoking, they crave nicotine. They want a replacement for nicotine from smoking and in as similar a form as possible to their old smoking habits. Therefore, many e-liquids provide a jolt of nicotine.

Nicotine gets a bad rap among much of the public. That’s because it’s so closely associated with the harm caused by smoking combustible cigarettes. However, as we’ve said more than once elsewhere, it’s the inhalation of burning tobacco and its resulting tar that causes most of the problems from smoking. Nicotine is vastly less harmful, although it is highly addictive.

Most, but not all, e-liquids contain nicotine. Some contain only flavors. Nicotine concentrations vary widely among different e-liquid products. We’ve seen a range from 0 to 50 milligrams of nicotine per milliliter. Most smokers wanting to use vaping in order to quit cigarettes need to experiment with different concentrations of nicotine to find what works best to control cravings.

Nicotine salt (a form of natural nicotine) is sometimes combined with benzoic acid for vaping purposes. Nicotine salt absorbs more quickly into the bloodstream than so-called freebase nicotine found in most e-juice. It has a smoother hit, allowing users to increase the nicotine concentration they’re consuming.

Nicotine salt requires its own type of vaping device such as the Juul or some type of other pod system or fourth-generation vaping device. Juul claims that its device using nicotine salt is absorbed 2.7 times faster than regular nicotine in other e-cigarettes (and similar to that of regular cigarettes). That absorption rate may cause Juul users to become addicted more quickly than those who use other vaping products. Anecdotal evidence supports this increased risk of addiction, although scientific research needs to confirm (or refute) this possibility.

One of the most seductive parts of vaping rituals is the variety of available flavors. Manufacturers are competing with regular tobacco companies and realize they can enhance the desirability of their product by infusing it with a variety of tantalizing flavors. Unfortunately, some of these flavors have been particularly tantalizing to teens.

Some flavors are derived from food extracts. Others are labeled simply as “natural and artificial flavorings.” Natural refers to flavors derived from plants or animals. Artificial can refer to almost anything, and manufacturers rarely disclose specifics. There’s no way to know exactly what’s in those flavorings.

Flavoring ingredients as well as many of the flavorings described in the following sections have been tested and approved for ingestion but not inhalation, which could present a quite different risk profile.

Currently, there are literally thousands of vape flavors available — everything from banana nut bread to bacon to menthol. Flavors like gummy bears or bubble gum have great appeal to teens and young adults; for that reason, many people have called for banning flavors from e-cigarettes. Under this pressure, Juul has recently (as of this writing) stopped selling vape cartridges containing any flavors other than tobacco or menthol. The U.S. federal government is actively considering whether to ban most vape flavors for other manufacturers as well.

At the end of the day, we’re pretty sure a person could find just about any flavor in the world and some that don’t even exist. However, because of unknown risks of flavors and their highly varied ingredients, vapers would be on safer ground if they avoided them altogether.

Cannabidiol (CBD) is an active component found in the cannabis plant. Tetrahydrocannabinol (THC) is the active constituent in cannabis that gives people a sense of euphoria or what’s called a high. Both come as an oil that can be vaped when mixed with vegetable glycerin and propylene glycol.

You may wonder what the difference is between cannabis, hemp, and marijuana. Hemp and marijuana are both cannabis plants. To be called hemp, it must contain less than 0.3 percent THC. Marijuana contains more than 0.3 percent THC. Sometimes the two plants crosspollinate and a hemp crop turns into a marijuana crop. Both CBD and THC are, thus, isolated components of two different types of cannabis plant.

CBD burst onto the scene quite recently. The 2018 Farm Bill changed everything. It legalized the production and sale of hemp that contains less than 0.3 percent THC. Today, you can find CBD derived from the hemp plant in everything from lotions to lollipops, water, tea, soft drinks, candy, and vape pens and other devices. You can buy these CBD products at your local drugstore, grocery store, CBD specialty store, smoke shop, vape store, online, and more.

You may wonder what made CBD so ubiquitous given that it doesn’t make you high. CBD has numerous purported health benefits. Although the FDA has only approved CBD for the treatment of difficult-to-control epilepsy, claims of its efficacy for other problems abound. A partial list of these positive health assertions includes the treatment and/or amelioration of:

The value of CBD is recommended for more than humans. You can often buy it at your local veterinarian’s office for your dog or cat. It’s promoted for animals with arthritis, pain, seizures, separation anxiety, and more.

If the majority of these purported benefits prove to be valid, most of us will be able to empty our medicine cabinets and fill them with CBD products. Unlikely.

California was the first state to legalize medical marijuana, in 1996, followed by over 30 states in the following two decades or so. Colorado and Washington led the way for legalization and/or decriminalization of recreational marijuana and THC in 2012, followed by another ten states and counting.

The major advantage of vaping THC over smoking marijuana is that vaping doesn’t involve burning, which by itself produces a variety of additional chemicals of unknown risks. However, whether vaping THC is safer than smoking marijuana is an open question. One serious concern about vaping THC is that it has been implicated as a possible cause of some cases of serious lung damage, possibly due to ingredients mixed with it.

Health benefits of medical marijuana have been difficult to firmly establish because federal law made such studies exceptionally difficult to conduct for decades. However, there is substantial evidence that marijuana:

Even in states where marijuana is legal, a robust black market offers THC for vaping, the safety of which is unknown. And vaping THC has been associated with serious cases of vaping-related lung damage. Never buy any vaping products from the street.