The Link between Vitamin D and Coronary Artery Disease

Some researchers think there is a link between vitamin D levels and coronary artery disease (CAD). CAD is the term for the type of cardiovascular disease with progressive closing of arteries that supply blood to the heart. It’s also known as atherosclerotic heart disease or atherosclerosis. If a critical artery closes completely, the result is a myocardial infarction, or heart attack.

Coronary artery disease is usually a silent disease. The first sign a person gets may be the sudden severe chest pain of a heart attack, or even sudden death.

Coronary artery disease results from years of accumulating fat and cholesterol in the walls of the arteries, called an atheromatous plaque. This produces a narrowing of the artery at the site of the plaque that eventually closes off the artery, as shown in the following diagram. 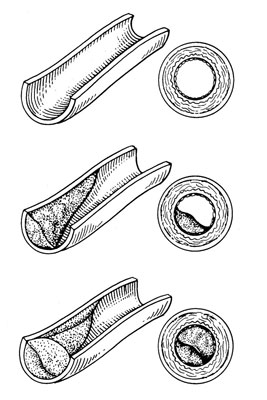 As cholesterol accumulates, the arteries narrow.

The atheromatous plaque develops in the following way:

There isn’t a definitive answer regarding the role of vitamin D in CAD; however, researchers think that vitamin D could be important in three ways: