Explore Book Buy On Amazon
Count the listings in your favorite food book, and you're likely to discover that more foods have names beginning with p than any other letter of the alphabet. Choosing ten nutritious ones is a cinch.

The papaya, also known as the paw-paw, is a pear-shaped melon with versatile pale-yellow flesh that you can serve cooked when unripe or enjoy raw when ripe (look for an orange-y gold rind). 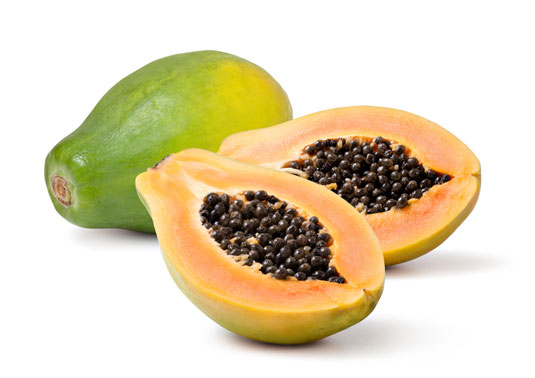 Either way, one small ripe papaya provides about half an adult’s daily value of vitamin A, more than a day’s worth of vitamin C, and about 10 percent of the daily dietary fiber allotment. Note that cooking the papaya reduces the vitamin C content because vitamin C is heat liable.

Smart cooks should know that the leaves of the papaya plant are also useful in the kitchen. The leaves are packed with papain, the proteolytic (protein-breaking) enzyme found in commercial meat tenderizers. In Central America, where the papaya was born, wrapping meat in papaya leaves is the standard tenderizing technique. But papain can irritate the skin, so handle the leaves with care.

The pear is a botanical cousin of the apple, a late-summer early-fall fruit that grows most plentifully in the American northwest. 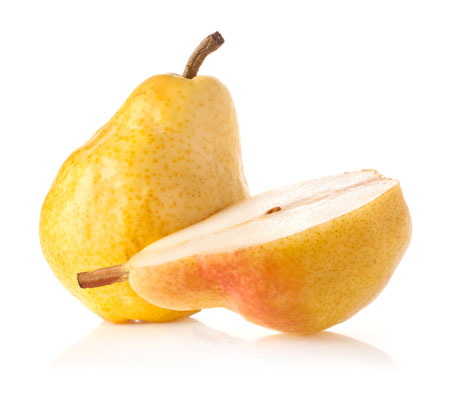 Although the apple is more popular, the pear is a better bet, nutritionally speaking. True, a 5-ounce fresh pear has 9 more calories than a 5-ounce apple, but the pear has 25 percent more protein than the apple, 30 percent more dietary fiber, including soluble pectin in the flesh and the insoluble fibers hemicellulose in the peel and lignan in those tiny gritty particles that crunch when you chew the pear. The pear also has 40 percent more iron and 50 percent more lutein (a naturally occurring plant chemical that protects vision). So it’s not surprising that, like people who eat an apple a day, those who substitute a pear are likely to need fewer prescription drugs.

Unfortunately, not every part of the pear is people-friendly. Like peach pits, apricot pits, and apple seeds, pear seeds contain amygdalin, a cyanide/sugar compound that breaks down into hydrogen cyanide in the stomach. An occasional seed isn’t necessarily hazardous for an adult, but swallowing only a few may be lethal for a child. 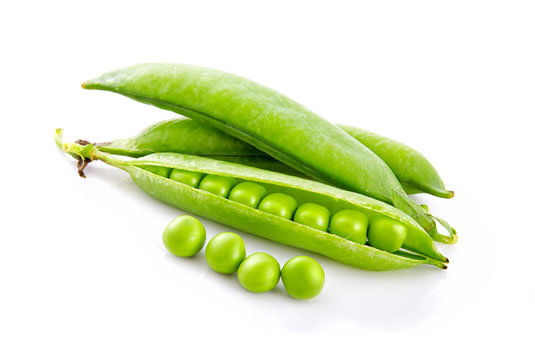 Peas taste good, too. They start out high in sugar, but within hours after picking, nearly half the sugar turns to starch. The fresher you get them, the sweeter they taste. You can pop them raw, straight from the pod, into your mouth or your salad.

It's neither a pine tree nor an apple, but the pineapple is still a twofer in the kitchen. 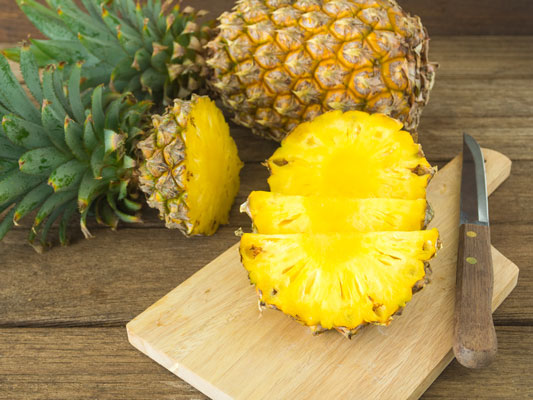 First, it’s rich in dietary fiber (2.3 grams per cup) and vitamin C (79 milligrams per cup; 72 percent of the RDA for a woman, 60 percent for a man). Second, it contains a natural meat tenderizer, the proteolytic (protein dissolving) enzyme bromelain, which is similar to the papain in papaya. Cover your beef, lamb, pork, or veal with chunks of fresh pineapple and let it set in the fridge overnight for a slightly sweeter, definitely tenderer meat.

The plantain is a member of the banana family, but unlike its peel-and-eat cousin, the plantain is classified botanically as a vegetable. 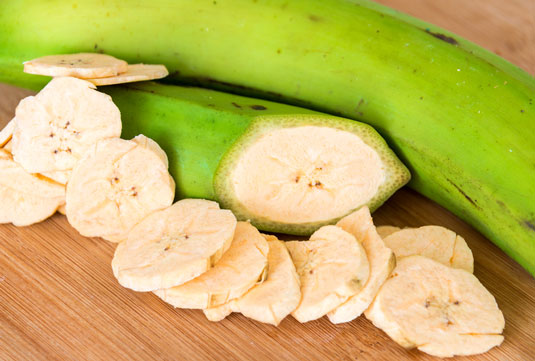 Another difference is that while the banana converts its starches to sugars as it ripens, the plantain doesn’t so you have to cook the plantains before serving to make its starch granules swell and break open, softening the flesh. The “fried bananas” so popular in Latin American cuisine are usually fried plantains with lots of added sugar to sweeten the otherwise starchy food.

On the other hand, a serving of plantains has more than ten times as much vitamin A, twice the vitamin C, and one-third more potassium than an equal amount of bananas.

Like bananas, plantains are rich in serotonin, dopamine, and other naturally occurring neurotransmitters (chemicals that make it possible for brain cells to communicate) that act as mood elevators. And if the latest chocolate research is right, you might increase the bliss potential by dipping those plantains in melted dark chocolate.

Ounce for ounce, pork has fewer calories and less total fat, saturated fat, and cholesterol than lamb and beef. 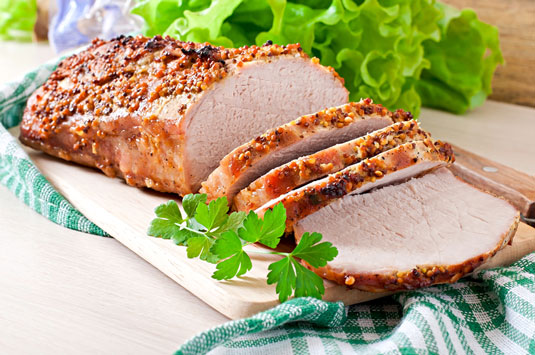 A team of Canadian researchers at the Lacombe Research Centre in Alberta, the University of Alberta, and the Prairie Swine Centre in Saskatoon, Saskatchewan, is charging ahead with its attempts to pack pork with heart-healthy omega-3 fatty acids. Beginning in 2011, the scientists were feeding their test animals omega-3-rich flaxseed and canola oil to discover just how much they can enrich the pork while keeping it stable in storage and tasty on the plate.

The humble potato is a filling food with indisputable nutrition virtues. 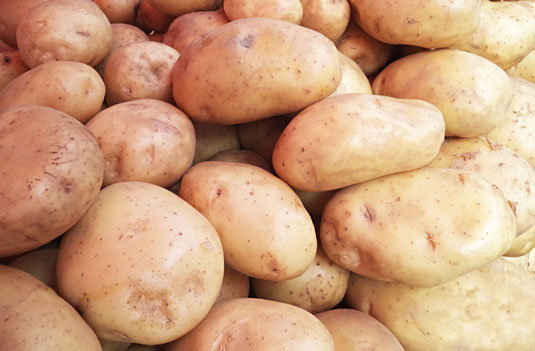 One 7-ounce oven-baked potato, skin included, dishes up 220 calories, mostly starchy carbs, plus 4 grams dietary fiber, 5 grams protein, and practically no fat. True, the proteins are “incomplete,” with limited amounts of some essential amino acids. But you can remedy that by serving potatoes the traditional way, boiled, with a little milk poured on. Or you could melt some (low-fat) cheese into a baked potato.

Potatoes, which have lots of vitamin C, were once eaten raw to prevent scurvy, the vitamin C deficiency disease. The fresher the potato, the higher the vitamin C.

Like other fish and seafood, prawns are a good source of heart-healthy omega-3 fatty acids plus minerals, such as magnesium and zinc, all wrapped in a diet-pleasing 99 calories per serving. 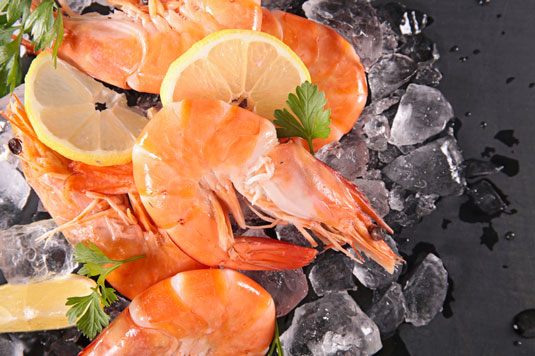 The prune is a food jampacked with antioxidants, vitamin A, nonheme iron (the form of iron found in plants), and fiber. Lots of fiber: Ounce for ounce, the fruit has more dietary fiber than dry beans. 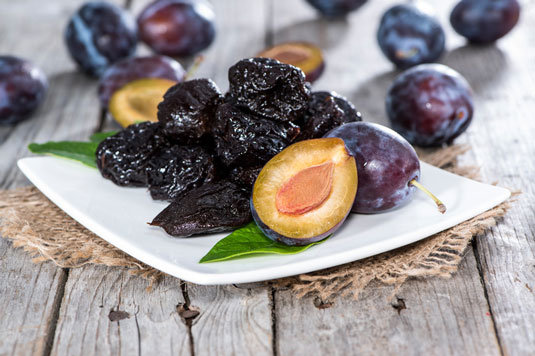 The prune’s true nutritional claim to fame is still its reliable ability to relieve constipation. Prunes contain dihydrophenylisatin, a naturally occurring chemical relative of biscodyl, the active ingredient in many over-the-counter laxatives. The dihydrophenylisatin is a stimulant that triggers intestinal contractions to move food along. As a result, if you eat too many prunes, you may experience diarrhea.

The pumpkin, a New World original now grown on every continent except Antarctica, is a member of the squash family with nary a smidgen of waste. 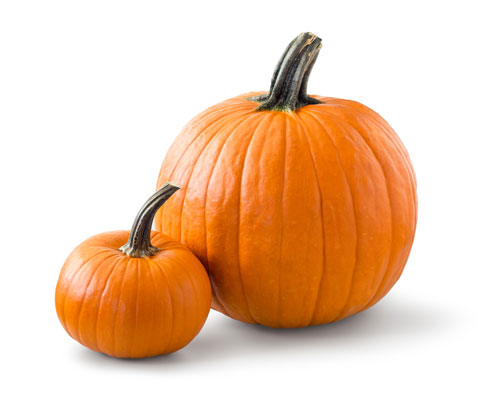 Boiled pumpkin flowers and leaves are green veggies. Dried or roasted pumpkin seeds are high-protein, high-fiber snacks. Pumpkin meat is an extraordinarily good source of vitamins A and C.