Where Do You Find Toxic Levels of Lead?

By: Gerald Don Wootan and Matthew Brittain Phillips and
Updated: 03-26-2016
From The Book: Detox Diets For Dummies 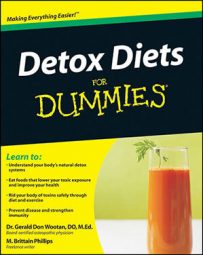 The toxicity of lead has been recognized for many years, but the widespread use of the metal throughout history means that we’ll be forced to deal with lead and its health consequences for the foreseeable future. Lead poisoning causes many health problems, including damage to neurological systems. The developing brains and nervous systems of children can be severely harmed if their lead levels are too high.

Federal legislation was enacted in the 1970s to remove lead from paint and fuel, and many people assume that lead levels have dwindled as a result. That’s simply not the case because lead doesn’t go away — it’s a very persistent material.

What are the major sources of lead toxicity today? Lead can be found in all sorts of places, including the following:

Dr. Gerald Don Wootan, DO, M.Ed., is a board-certified osteopathic physician and the medical director of Jenks Health Team, a medical practice that specializes in integrative medicine with an emphasis on natural detoxification and nutritional supplementation. M. Brittain Phillips is a freelance writer.