By: Carol Ann Rinzler and Ken DeVault and
Updated: 03-26-2016
From The Book: Heartburn and Reflux For Dummies

Heartburn and Reflux For Dummies 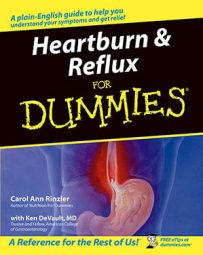 When you're talking about tests, this section is the Big Time for your esophagus. To reach this level of testing, you must exhibit symptoms of GERD which suggest esophageal damage that requires your doctor take a closer look with one or more of the three following tests:

These tests are listed in order of complexity. Which one (or more) your doctor orders is up to him.

The barium swallow is most often done for people who have frequent reflux or difficulty swallowing. The test requires you to sip a solution of the metallic element barium in water. When you drink the liquid, the barium coats all the teensy little folds and crevices of your esophageal lining, making them visible to a fluoroscope, a device that shows a real-time image created by X-rays passing through the body.

Don't consume any food or liquids for at least 12 hours before the test.

To take this test, you

1. Stand behind a fluoroscopic screen.

2. Take swallows of a barium liquid.

3. Have pictures taken to show how the liquid moves from your mouth to your pharynx (the opening at the back of your mouth) and your esophagus, and how it flows down the esophagus.

Sometimes you may be asked to swallow a soft barium "marshmallow" (white bread soaked in barium liquid), which shows up as solid material passing through your gut. This is more often done when a patient has trouble with swallowing.

Pictures showing smooth, even distribution of the barium liquid over the lining of the pharynx and the esophagus say your esophagus is healthy.

Abnormalities in the distribution of the barium liquid may show the following GERD-related problems:

The upper GI series is a fluoroscopic examination of the esophagus, stomach, and small intestine. This test looks for the same kinds of problems as a barium swallow, but the upper GI — for gastrointestinal — series covers more intestinal acreage.

This test is usually recommended for people who have

You swallow a barium solution. Then you lie on a tilting table that is first positioned to enable a technician to do a fluoroscopic exam while you're in standing position.

Then the technician turns the table to different angles and positions in order to make different parts of your upper digestive system visible to the fluoroscopic camera.

A smooth distribution of the barium solution over the lining of the esophagus, stomach, and small intestine shows a healthy upper GI tract, meaning you may have GERD but don't have any visible reflux-related damage to your gastrointestinal tract.

Unusual or uneven distribution of the barium solution may show

If the barium swallow or the upper GI series shows abnormalities on the surface of the esophagus, your doctor may recommend an upper endoscopy.This test has the advantage of enabling the doctor to look directly at the esophageal tissue and to obtain tissue samples for biopsy so as to determine whether cells in the tissue are malignant (cancerous).

In fact, many guideline statements (including the official guideline statement of the American College of Gastroenterology, written by the contributing author of this very book) suggest that upper endoscopy is actually the first test to do if the patient is at risk for reflux complications. Its big advantage over radiology is that tissue samples (biopsies) can be performed with endoscopy.

The person performing the endoscopy sprays your throat to numb it and then, slides a thin, flexible plastic tube called an endoscope down your mouth into your esophagus.

The endoscope has a tiny camera that transmits an image to a television screen where the doctor can visualize the esophageal lining. If he sees something unusual, such as a growth on the tissue, the doctor may also use small tweezerlike forceps in the endoscope to take a sample for a biopsy. No, you don't feel a thing — you don't have any nerve endings in your esophagus that say "ouch" when the doctor takes the sample.

If the endoscopy shows a narrowing of the esophagus, the doctor may insert a balloon or other stretching device through the endoscope and inflate it inside your esophagus to dilate (stretch) the tube right on the spot. Afterwards, your esophagus will stay stretched, making it easier for you to swallow.

Smooth, undisturbed tissue shows a healthy esophageal lining. In other words, you may have GERD, but it hasn't damaged your esophagus.

A biopsy of esophageal tissue can diagnose conditions such as

With diagnosis in hand, your doctor can begin to treat these problems.

Carol Ann Rinzler writes a nutrition column for the New York Daily News and has authored more than 20 books.

Ken DeVault, MD, is coauthor of the American College of Gastroenterology's official guideline statements on the diagnosis and treatment of GERD.