Medical Terminology for the Muscular System

The musculoskeletal system is made up of muscles and joints and, therefore, lots of medical terms. The muscles — all 600 of them and more — are responsible for movement. The skeleton provides attachment points and support for muscles, but it’s the muscle tissue’s ability to extend and contract that makes movement happen. So, for every climb of the elliptical machine, you can thank muscular tissue for making it possible.

Muscles make up the major part of fleshy portions of the body and account for one half of body weight.

The class system is alive and well, at least as far as your muscles are concerned. There are three classes of muscles: skeletal, visceral, and cardiac.

Unlike other muscle, cardiac muscle keeps beating even when removed from the body, as in a heart transplant.

Striated muscles are also called skeletal or voluntary muscles. These are the muscles that move all the bones, as well as the face and the eyes. The body is able to consciously control the activity of a striated muscle.

The second type of muscle is smooth muscle, also known as visceral, involuntary or unstriated muscle. The body has no conscious control over smooth muscles, which move the internal organs such as the digestive tract. The smooth muscles are also found in blood vessels and secretory ducts leading from glands.

Skeletal muscle fibers are arranged in bundles, but smooth muscles form sheets of fibers that wrap around tubes and vessels.

The third type of muscle is cardiac muscle. It is striated in appearance but is like smooth muscle in its actions. Movement of cardiac muscle cannot be consciously controlled. Cardiac muscle has branching fibers forming most of the wall of the heart and controlling the contractions producing the heartbeat.

Now that you know the classes and types of muscles, let’s take a more in-depth look at how they work. You already know that skeletal muscles, or striated muscles, are the muscles that move the bones of the body. Now get ready for the scoop on what makes it possible.

Near the point of insertion, the muscle narrows and is connected to the bone by a tendon. One type of tendon that helps attach bone to muscles is called an aponeurosis.

Roundup of the superficial muscles

Your superficial muscles are so named because these are the ones you’re most likely to see with the naked eye. These workhorses of the muscular system help make you unique. They help your body perform everyday functions like picking up objects and smiling. 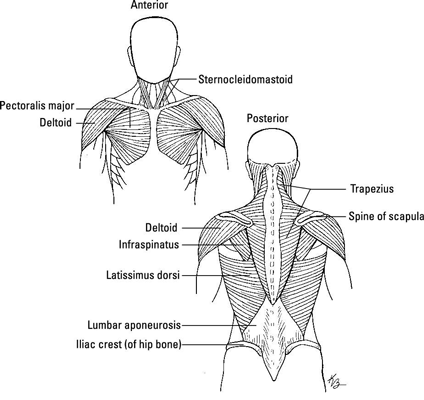