By: Beverley Henderson and
Updated: 01-03-2020
From The Book: Medical Terminology For Dummies

Explore Book Buy On Amazon
Your skin (the body’s largest organ), glands, nails, and hair — also known as the integumentary system — serve as the “public face” of your body. Consider it your marketing team, letting the world know by their condition how healthy the rest of your body is. Healthy skin, along with accessory organs glands, hair, and nails, are the hallmarks of healthy insides, so care for them accordingly.

The skin has two types of glands that, as accessory organs, produce important secretions. These glands under the skin’s surface are called the sebaceous (oil) glands and the sudoriferous (sweat) glands.

The sebaceous glands produce an oily secretion called sebum, whereas the sudoriferous glands produce a watery secretion called sweat. Sebum and sweat are carried to the outer edges of the skin by ducts and excreted through openings in the skin called pores. Sebum helps lubricate the skin. Sebaceous glands are closely associated with hair follicles, and their ducts open into the hair follicle through which the sebum is released.

Sudoriferous (sweat) glands are tiny coiled glands found on almost all body surfaces. You have about 2 million of them in your body. There are many more in the palms of the hands, and you’d find approximately 3,000 glands per square inch on the sole of your foot. The tiny openings on the surface are called pores. Sweat helps cool the body as it evaporates from the skin surface. Nerve fibers under the skin detect pain, temperature, pressure, and touch. The adjustment of the body to its environment depends on the sensory messages relayed to the brain and spinal cord by the sensitive nerve endings in the skin.

Diaphoresis comes from the Greek dia, meaning “through,” and phoreo, meaning “I carry.” Translated, it means “the carrying through of perspiration.”

The following figure illustrates the layers of the skin and some of its structures. 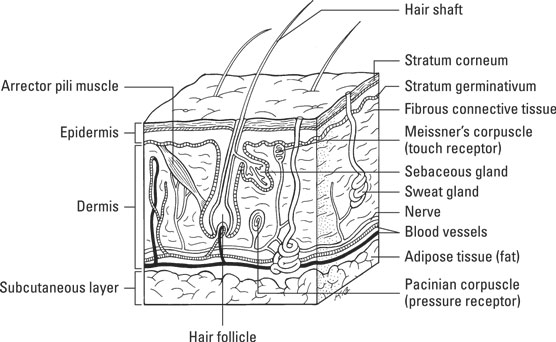 Cross section of the skin showing layers and some specialized structures.

Stinking it up: Your sweat glands

Sweat gets a bad rap for being smelly when, in fact, it’s not your fault. Your body’s smell is caused by bacteria. Sweat or perspiration is almost pure water, with dissolved materials such as salt making up less than 1 percent of its total composition. Sweat is actually colorless and odorless. The odor produced when sweat accumulates is due to the action of bacteria on it.

Certain sweat glands, active only from puberty onward and larger than ordinary sweat glands, are concentrated near the reproductive organs and in the axillae (armpits). These glands secrete an odorless sweat that contains substances that are easily broken down by skin bacteria. The breakdown products are responsible for the characteristic “human body odor.” So the next time someone tells you your sweat stinks, you can say, “I beg to differ. My bacteria are the culprits.”

The ceruminous glands are classified as modified sweat glands and are found in the ear canal. These glands produce a yellow waxy substance called cerumen (ear wax).

A hair fiber is composed of a network of horny cells (hold your giggles, please) filled with hard protein called keratin. Hair growth is similar to the growth of the epidermal layer of the skin. Deep-lying cells in hair roots move forward through the hair follicles, or shafts, that hold the hair fiber. Melanocytes located at the root of hair follicles supply the melanin pigment for the hair fiber. Hair color depends on the amount of melanin present, as it does with the color of the skin. Because hormone production decreases as we get older, the hair loses color and becomes transparent (which we see as gray).

Nails are hard keratin plates that cover the dorsal (top) surface of the last bone of each toe and finger. Nails are composed of horny cells that are cemented together and can extend indefinitely until cut or broken. A nail grows in thickness and length by division of the cells of the nerve root, at the base of the nail plate. Nails grow approximately 1 millimeter a week, which means that fingernails may regrow completely in three to five months. Toenails grow more slowly than fingernails, but if you have lost a toenail due to a nasty stubbing incident, it will come back eventually.