How the Muscular System Works

By: Beverley Henderson and
Updated: 01-03-2020
From The Book: Medical Terminology For Dummies

Explore Book Buy On Amazon
The musculoskeletal system is made up of muscles and joints. The muscles — all 600 of them and more — are responsible for movement. The skeleton provides attachment points and support for muscles, but it’s the muscle tissue’s ability to extend and contract that makes movement happen. So, for every climb of the elliptical machine, you can thank muscular tissue for making it possible.

Muscles make up the major part of fleshy portions of the body and account for one half of body weight. Muscles vary in proportion to body size, and the shape of the body is determined by muscles covering bones.

Muscles account for 40 percent of our total body weight; the skeleton accounts for only about 18 percent.

Muscular expanding and contracting doesn’t just happen in your biceps. It happens all over the body. Muscles support and maintain posture and produce body heat. They help form many internal organs and regulate the work those organs do behind the scenes (such as the heart, uterus, lungs, and intestines) even when the body is not moving. The muscles of arteries, intestines, heart, and stomach, for example, are always at work even when we aren’t thinking of them. However, the silent work muscles do inside your body is wholly different from more obvious muscular work done by your arms and legs, for example.

All bodily movement, whether lifting of an arm, or the beating of the heart, involves the contraction and relaxation of voluntary or involuntary muscles.

The class system is alive and well, at least as far as your muscles are concerned. There are three classes of muscles: skeletal, visceral, and cardiac.

Unlike other muscle, cardiac (heart) muscle keeps beating even when removed from the body, as in a heart transplant. And even if it stops beating, it can be jump-started with an external electrical charge. Not so with the other muscles.

Striated muscles are also called skeletal or voluntary muscles. These are the muscles that move all the bones, as well as the face and the eyes. The body is able to consciously control the activity of a striated muscle.

The second type of muscle is smooth muscle, also known as visceral, involuntary or unstriated muscle. The body has no conscious control over smooth muscles, which move the internal organs such as the digestive tract. The smooth muscles are also found in blood vessels and secretory ducts leading from glands.

Skeletal muscle fibers are arranged in bundles, but smooth muscles form sheets of fibers that wrap around tubes and vessels.

The third type of muscle is cardiac muscle. It is striated in appearance but is like smooth muscle in its actions. Movement of cardiac muscle cannot be consciously controlled. Cardiac muscle has branching fibers forming most of the wall of the heart and controlling the contractions producing the heartbeat.

Now that you know the classes and types of muscles, let’s take a more in-depth look at how they work. You already know that skeletal muscles, or striated muscles, are the muscles that move the bones of the body. Now get ready for the scoop on what makes it possible.

It takes 200 muscles working together to take a step.

Roundup of the superficial muscles

Sometimes, being superficial isn’t a bad thing. Take, for example, your superficial muscles, so named because these are the muscles you’re most likely to see with the naked eye. These workhorses of the muscular system help make you unique. Though they all have complicated-sounding names, they help your body perform everyday functions like picking up objects and smiling. 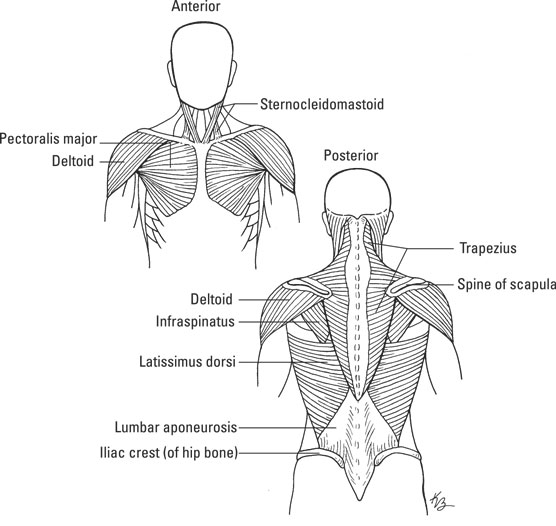 Posterior view of the neck and shoulder muscles. 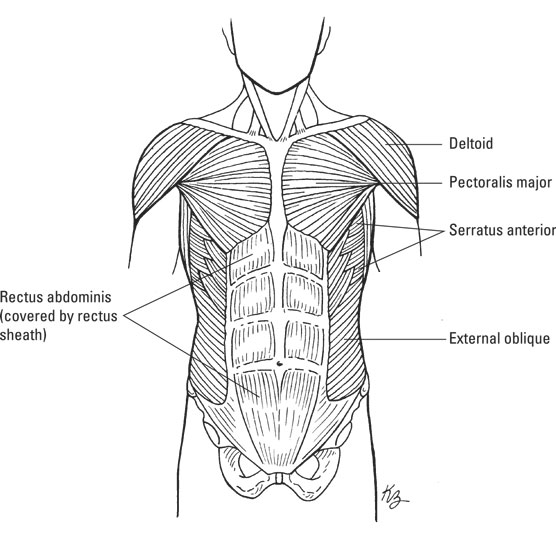 Anterior muscles of the chest and abdomen. 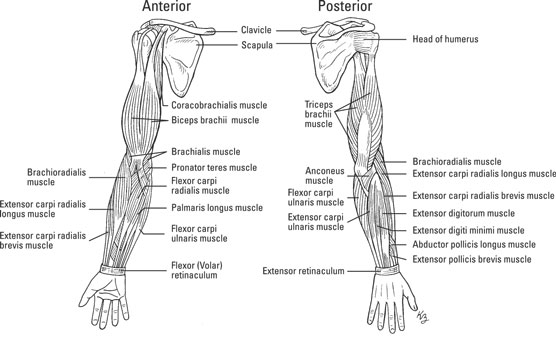 The muscles of the upper limb, anterior (A) and posterior (B). 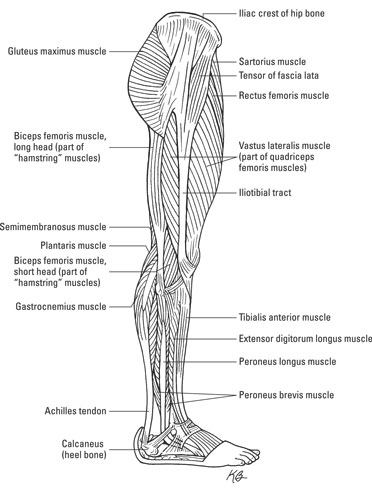 The muscles of the lower limb.

So, the moral of our muscle story is teamwork. Bones cannot move alone without being attached to muscle. Muscles cannot move alone, without being attached to stationary bones to allow support for that movement. Neither bones nor muscles could function without the attachments provided by the tendons and ligaments. Body movement then, is made possible by the bones and skeletal muscles working together in addition to the visceral and cardiac muscles that function to maintain the muscular rhythm of our vital organs. It’s all one big, happy family of muscles.