Medical Terminology for How the Respiratory System Works

The respiratory system has its own set of medical terms you need to know. Air contains about 21 percent oxygen that is inhaled through the nose, finds its way to the lungs, into the lungs’ air spaces, and passes into tiny capillary blood vessels surrounding the air spaces.

At the same time, carbon dioxide passes from the capillary blood vessels into the air spaces of the lungs to be exhaled. Exhaled air contains about 16 percent oxygen.

The normal adult cycle of inhaling and exhaling, including a short rest between, takes place about 16–18 times per minute. This is known as the respiratory rate. 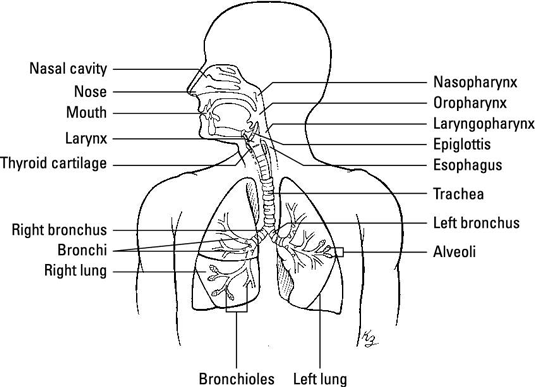 When you inhale, or inspire, air enters the body through the nose via the external nasal nares (nostrils) and passes through the nasal cavity. This cavity is lined with a mucous membrane and fine hairs called cilia that filter out foreign bodies and warm and moisten the air. The paranasal sinuses are hollow, air spaces in the skull that join up with the nasal cavity.

Paranasal sinuses have a mucous membrane lining and secrete mucus. They make the bones of the skull lighter and help in the production of sound. They connect with the nasal cavity and are named for the bones they are located in: the frontal, ethmoid, sphenoid, and maxillary. The singular form of nostrils, or nares, is naris.

Five hundred cubic feet of air passes through the nasal cavities every 24 hours.

After passing through the nasal cavity, air reaches the pharynx, which is made up of three parts. The nasopharynx is nearest the nasal cavity and contains the adenoids, which are masses of lymphatic tissue, which, in children, if enlarged, can obstruct the airway passage.

This area is divided into two branches, the larynx (voice box) and the esophagus (passage to stomach). The larynx leads downward to the trachea, where the air goes down to the lungs. The vocal cords have a slit between them called the glottis. Sound is produced as air moves out of the lungs, through the glottis, causing vibration. As food enters from the mouth and air enters from the nose, they both come together in the pharynx.

What stops food from going into the respiratory system after it’s swallowed? The epiglottis is a flap of cartilage attached to the roof of the tongue that acts like a lid over the larynx.

On its way to the lungs, air passes from the larynx to the trachea (windpipe), a tube 4 1/2 inches long and about 1 inch in diameter. The trachea is kept open by 16–20 rings of cartilage that stiffen the front and sides of the tube. Some of these rings make up the thyroid cartilage forming the projection called the Adam’s apple. The Adam’s apple is the largest cartilage ring in the larynx.

Each alveolus is made up of a layer of epithelium. This very thin wall permits exchange of gases between the alveolus and capillaries that surround and come in close contact with it. The blood that flows through the capillaries takes the oxygen from the alveolus and leaves behind carbon dioxide to be exhaled. The oxygenated blood then carries the oxygen to all parts of the body.

The right lung is slightly larger than the left, divided into three lobes, the right upper, middle, and lower lobes. The left lung has two lobes, the left upper and lower lobes. To remember how many lobes each lung has, remember that the heart resides on the left side of the chest, thus taking up more room and hence leaving room for only two lobes.

One lobe of a lung can be surgically removed without damaging remaining lobes, which continue to function.

When the lungs are full, the diaphragm relaxes and elevates, making the thoracic cavity smaller, increasing the air pressure in the thorax. Air is then expelled out of the lungs to equalize the pressure. This is called exhalation or expiration.