The Many Forms of OCD

By: Charles H. Elliott and Laura L. Smith and
Updated: 03-26-2016
From The Book: Obsessive-Compulsive Disorder For Dummies 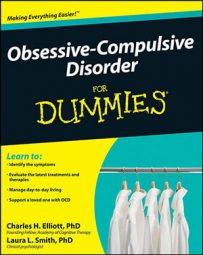 OCD (obsessive-compulsive disorder) can be categorized in quite a few ways, and no clear consensus exists among professionals. However, the following list shows some of the most common forms that this strange disorder takes:

Various forms of OCD sometimes overlap and co-occur. If you have several of them, it doesn’t necessarily mean that your treatment won’t succeed.

Charles H. Elliott, Ph.D.  (Corrales, New Mexico) is a clinical psychologist and a Founding Fellow in the Academy of Cognitive Therapy. He is also a member of the faculty at Fielding Graduate University. He specializes in the treatment of adolescents and adults with obsessive compulsive disorder, anxiety, anger, depression, and personality disorders. He presents nationally and internationally on new developments in the assessment and therapy of emotional disorders.

Laura L. Smith, Ph.D. (Corrales, New Mexico) is a clinical psychologist who specializes in the assessment and treatment of adults and children with obsessive compulsive disorder, as well as personality disorders, depression, anxiety, ADHD, and learning disorders. She is often asked to provide consultations to attorneys, school districts, and governmental agencies. She presents workshops on cognitive therapy and mental health issues to national and international audiences.