Brain Structure and Function of Those with Bipolar Disorder

By: Candida Fink and Joe Kraynak and
Updated: 12-29-2021
From The Book: Bipolar Disorder For Dummies

Explore Book Buy On Amazon
Pinpointing the location of bipolar disorder in your brain is almost as difficult as finding affordable health insurance. Brain imaging studies have found few consistent changes when looking at large brain structures. They've had much more success looking at changes at the cellular level and, in particular, at functional changes in cells and groups of cells in different brain areas.

Here is some basic brain anatomy and physiology that helps explain the research.

Looking at a whole human brain from the outside, as shown, you see the cerebral hemispheres (the large sections, not labeled in the figure, that comprise most of the brain), the cerebellum (the small ball toward the back of the hemispheres), and the brain stem (a long, thin structure leaving the brain and connecting it to the spinal cord). The cerebral hemispheres are divided into four sections that serve broadly different functions — the frontal lobe, the parietal lobe, the temporal lobe, and the occipital lobe. 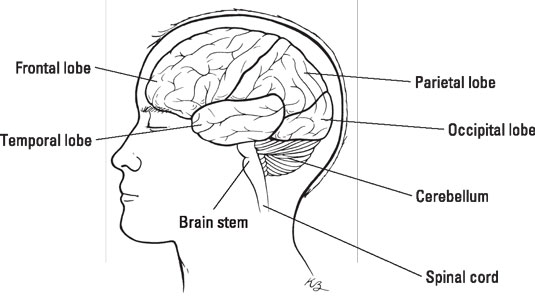 The human brain from the outside looking in
© Kathryn Born, MA
When you open the brain up, pulling the two hemispheres apart into two equal parts, and look inside, you see a number of brain structures within the hemispheres. Within the outer layer, researchers have identified a number of cell areas related to different functions.

Several of these areas appear frequently in studies of bipolar, including the prefrontal cortex and the anterior cingulate cortex. Below the large outer layer are a number of structures, some of which are quite important in bipolar disorder research, including the thalamus, hypothalamus, hippocampus, and amygdala. 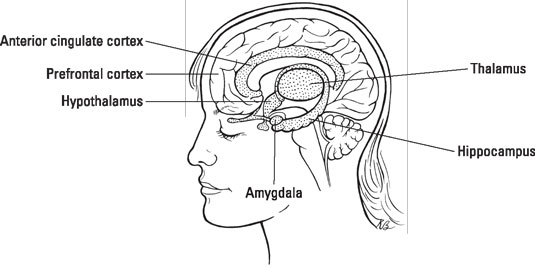 Exploring the functions of different areas of the brain

Now that you have a bird's-eye view of the brain, consider the functions of some of these areas: All of these areas perform many other functions, as well, and functions may overlap between areas.

Viewing the brain under a microscope

Within the brain is a system of cavities, including spaces called the ventricles, that make, circulate, and then reabsorb cerebrospinal fluid. This fluid serves as a mechanical shock absorber to the brain but also brings nutrients from and filters waste back into the blood stream.

Another important component of brain anatomy is comprised of cells that make up all of these structures. Brain cells include neurons and glia.

The gray matter of the cortex includes the cell bodies (central section) and dendrites (one of the connecting ends) of neurons, as well as glial cells. The white matter is made up of the axons (another type of connecting end) of neurons.

Neurons communicate with one another in many different ways, but communication occurs primarily across the synapse — the space between neurons or between neurons and other cells, such as a gland or muscle cell. The most common type of communication occurs when one end of the neuron (often the axon, but not always) releases a chemical messenger into the synapse (as shown in the figure below). The next cell (often the dendrite of another neuron) receives the chemical messenger. 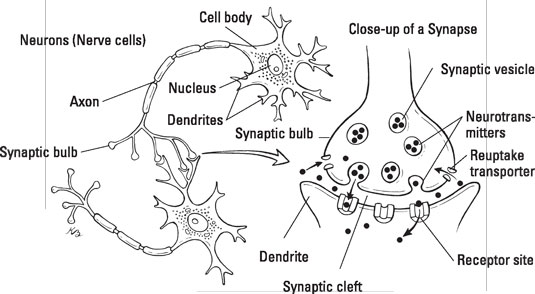 Nervous system cells communicate in ways beyond the synapse. For example, chemicals called neuropeptides communicate between cells but not across synapses. Of great importance in the current research on bipolar disorder is the communication between glial cells and neurons.

Disruptions in these communication systems may be at least as important as problems in neuron-to-neuron transmissions. Intracellular (within-cell) communication may also play a role.

Candida Fink, MD is a psychiatrist, board certified in child, adolescent, and adult psychiatry, who specializes in working with people of all ages?and their loved ones?to manage bipolar disorder. Joe Kraynak is a professional writer who deals with bipolar in his family.