By: Stephen Shore and Linda G. Rastelli and Temple Grandin and
Updated: 07-01-2021
From The Book: Understanding Autism For Dummies 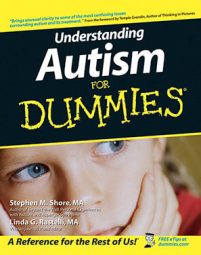 If a doctor diagnoses a child with some variant of autism spectrum disorder, the need for immediate intervention is the same. Such a diagnosis means that the child doesn’t fit the clinical criteria for an autism diagnosis, and it doesn’t address the severity of the symptoms that are present.

Although not much is known about childhood disintegrative disorder (CDD), children with this condition develop normally until they reach 3 to 4 years of age (rarely do children show change later than this, although some children develop this disorder as late as 10 years). At that point, they undergo a quick regression (faster than children with regressive-onset autism), usually losing all language ability and in some cases losing bowel and bladder control. In a show of other symptoms, the children can have epileptic seizures, for which anticonvulsive drugs are often helpful, and motor disorders, probably caused by acute sensory processing problems.

The National Institutes of Health considers CDD part of the grouping of pervasive developmental disorders, but the Centers for Disease Control and Prevention disagrees. At any rate, CDD is quite rare, and because children experience such a late onset of symptoms, they require a very thorough medical workup. The individual treatment for these kids can be almost identical to the treatment of autism.

Many children who exhibit more severe cases of attention-deficit/hyperactivity disorder, or AD/HD, often share many of the characteristics and features with children at the high-functioning/Asperger syndrome end of the autism spectrum. This is true particularly in the areas of communication, social integration, and behavior. Some children get diagnosed with one of the disorders and then receive the other diagnosis at a later time.

Symptoms for both autism and AD/HD include problems with organization, sensory issues, attention, and social skills. However, the delay in acquiring language that occurs with more severe autism isn’t consistent with AD/HD.

What you (and your doctors) should keep in mind is that the two disorders are frequently confused because of their overlapping behavioral symptoms. Also, hyperactivity doesn’t always equal AD/HD. It can be part of many other childhood developmental problems.

The implication for parents is to know their child well and to make sure they get a second opinion on their child’s diagnosis. In schools, AD/HD is treated differently than autism. Although the disorder is considered a disability under the Americans with Disabilities Act, schools usually offer a different set of accommodations than they do for children on the autism spectrum.

Science has come a long way from the time when autism was confused with deafness or mental retardation, but not that far. Don’t misunderstand: Some of the alternative diagnoses may be correct; that is, they may be present in addition to autism. However, a diagnosis of autism may better explain a person’s symptoms than any of the psychological categories he or she can fall into when autism isn’t a suspect.

Sometimes people who are aggressive or seem resistant to authority are given a psychological diagnosis such as oppositional defiant disorder, conduct disorder, or borderline personality disorder. Bipolar disorder and depression are other diagnoses sometimes given to people who should be diagnosed with autism, which does lend itself to mood disorders.

Obsessive-compulsive disorder is also easily diagnosed in autistic children. A child may have any of these disorders in addition to autism, but autism should be considered the primary problem.

You should press your doctors to investigate further if you aren’t satisfied with the diagnosis or if your child doesn’t improve after some rounds of medication.

Other syndromes that may look a bit like autism, but definitely aren’t autism, include the following (Note: Some of these syndromes may occur with autism or be mistaken for autism; people can have more than one disorder at a time):

Stephen M. Shore received a regressive autism diagnosis at age 18 months, became nonverbal, and was deemed “too sick” to be treated on an outpatient basis. Today, he’s finishing a doctoral degree focused on helping people with autism lead fulfilling and productive lives. When not teaching college-level courses in special education and teaching children with autism how to play musical instruments, he consults and presents on autism-related issues internationally. Some topics of particular interest to him include comparative approaches for helping people with autism, education, and disaster preparedness for people with disabilities. He also focuses on challenges faced by adults in terms of self-advocacy, disclosure, post-secondary education, employment, interdependent living, and relationships.
Stephen holds bachelor degrees in music and accounting and information systems from the University of Massachusetts at Amherst. He also holds a masters degree in music education and is on the cusp of finishing his doctorate in education from Boston University. Although he seems to spend most of his time traveling in airplanes (Boeing 747-400 preferred), he resides in Brookline, Massachusetts, with his wife on the rare occasions when he’s home.

Linda G. Rastelli is an award-winning journalist, instructional designer, and author with 20 years of experience in writing and designing instruction for health, education, and business topics. In her career, she has focused on making complex and technical information understandable to the layperson. Although she has covered subjects ranging from financial ratio analysis to educational reform, her most challenging inquiry to date — an undertaking that has made her other projects look like finger painting in comparison — has been autism.
Linda holds a bachelor of arts degree from the University of Delaware and a masters degree from Columbia University. She lives on the New Jersey coast with her husband and her cat, who have reached a blissful state of detente. She hopes to keep her day job.