By: Rhena Branch and Rob Willson and
Updated: 08-11-2021
From The Book: Cognitive Behavioural Therapy For Dummies 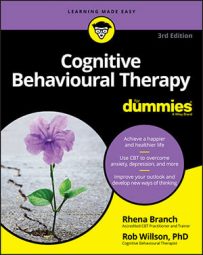 Explore Book Buy On Amazon
Psychological problems are no more mysterious than physical ones. In the recent past (and even today) people often viewed mental health problems as a sign of intrinsic character flaws. If your body has a problem, that’s understandable, but if your mind has a problem, then something must be wrong with the whole of you.

Not true. Mind and body aren’t separate entities; you’re no more to blame for psychological problems than for physical problems. The points in this article highlight and bust many myths surrounding mental health. Some contradict one another, yet people often find that they hold more than one conflicting negative idea at the same time!

If you are embarking on cognitive behavioral therapy (CBT), good for you! Getting help for mental health issues or behaviors is nothing to be ashamed about; in fact, congratulations on working toward a healthier you.

When you’re depressed or suffering from anxiety or panic (to name but a few), you’re in a diminished state; you’re ill or are in a weakened state. Would you consider yourself weak for having a bout of flu or epilepsy? Probably (and hopefully) not. Weakened through illness doesn’t equal weak as an overall person.

Similarly, mental strength doesn’t equal mental health. Many resilient people who pride themselves as "copers" find periods of poor mental health particularly hard to accept. Even people with jobs that require tremendous mental fortitude such as parents, teachers, nurses, surgeons, firemen, paramedics, the military, performers and athletes can and do suffer periods of mental illness. So, if someone tells you that she’s never had any psychological problems in her life, it doesn’t mean that she’s stronger than you; it means that she’s either extraordinarily fortunate or lying.

I should be able to get better on my own

Should you, though? This monster myth dances a damaging duo with the one in the preceding section. Shame about mental ill health leads to secrecy and tends to keep people suffering in silence for a long time. We may be writing a self-help book, but that’s only one way to get better.

Mental health professionals exist because everyone needs help to overcome problems; you can’t always do it all by yourself. There’s no virtue in suffering needlessly, so get help sooner rather than later.

Mental health is an either/or issue

Like your physical body, your mind is ever vulnerable to injury or illness. A very bad episode in your life such as a trauma can leave you psychologically injured. You need proper care to repair. Protracted periods of stress can wear you down and leave you open to a nasty bout of depression. Even if you suffer from a chronic mental health disorder like bipolar disorder, you’re not always mentally unwell. With the appropriate medication and treatment, you can lead a stable life much the same as someone suffering from epilepsy or diabetes. Therefore, nobody is ever either completely mentally well or unwell; everyone experiences both in a lifetime.

You get better all at once

Recovery from depression or anxiety takes time. Everyone’s journey is different; how quickly and consistently you start to improve depends on a host of factors, including how severely unwell you were to start with. Be patient with yourself, and don’t give up if you have a setback. Setbacks are a normal part of recovery, and you often can learn from them.

Pacing yourself — being realistic about goals — is important. A good CBT therapist helps motivate you and rein you in if you’re expecting too much of yourself. Even after you’re beginning to see the light flickering at the end of the proverbial tunnel, remember that you’re convalescing. Keep treating yourself compassionately and be aware of your limitations until you’re well and truly back on your feet.

The drugs don’t work; they just make you worse

Many people recover from common mental health problems without needing psychiatric medication. Some need medication for only a short period of time, perhaps to aid sleep, alleviate anxiety symptoms or readjust depleted levels of serotonin via an antidepressant. Most of the psychiatric medications prescribed by your doctor have relatively minor side effects and aren’t dependency forming or addictive.

Doctors should be mindful of limiting the number of prescriptions given, do standard medication reviews and inform you of any potential side effects so you know what to expect. Your doctor should also consult you about stopping medications and give you a gradual reduction regime to curtail any possible withdrawal effects. The large majority of individuals we treat have no major difficulties going on or coming off medication.

A lot of scaremongering goes on out there about everyday psychiatric medications, and it isn’t doing sufferers much service. If you go online to research a drug, stick to very reputable websites and avoid opinion-based anecdotal forums. Research into the efficacy and safety of drugs can be confusing and misleadingly represented in the media, so be skeptical about what you hear.

For many people, the drugs do work; for others, medication isn’t something they can afford to do without. Conditions like bipolar, forms of psychosis, and severe obsessive compulsive disorder (OCD) or body dysmorphic disorder (BDD) require carefully considered medications or combinations of medications to be successfully managed. Speak to a registered psychologist or psychiatrist if you’re in need of a professional opinion.

Here’s one of the contradictions we talked about earlier in the chapter. On the one hand, people tend to view psychological illness as shameful, whilst on the other they romanticize some forms of disturbance. Have you ever heard someone describe herself as "a little OCD" because she likes a tidy house or is very organized? Or perhaps you know of someone who describes herself as having a "phobia" of something that she really just dislikes.

To trivialize or romanticize any type of mental health problem this way is to minimize the profound suffering these disorders can cause. Of course, people use psychological terms in a colloquial sense and mean no harm by it. But for someone with true OCD that impacts her ability to work and maintain relationships, a flippant comment can be hard to swallow. Then you have the articles in the news about online sites that seem to promote or glamorize self-harm and eating disorders.

A lot of serious misrepresentations and misunderstandings of mental health problems are floating around online, in film, on TV, and even among well-meaning health workers who may lack specific psychiatric training. Mental illness is no laughing matter, nor is it stylish to deliberately adopt or mimic selected symptoms. Some social media sites are making attempts to limit profiles that promote self-harm or eating disorders, but it’s still a work in progress.

Many of the tips and strategies in this book are useful not just to pull yourself out of a slump but also to keep you running at optimal levels. You may not be able to prevent every physical or mental illness through conscientious care of your mind/body "machine;" indeed, that would be impossible! But you can take care to look after yourself during hard times, seek professional help at the first hint of relapse (if you’ve had psychological difficulties in the past) and embrace the types of healthy mental attitudes peppered throughout this book.

Everyone can tell when a person has a mental illness

Actually, it’s almost impossible to tell just by looking whether a person is depressed or anxious, has OCD or post-traumatic stress disorder (PTSD), or suffers panic attacks. Even psychosis isn’t immediately obvious and requires professional assessment. When people experience panic attacks in public, others often come to their aid thinking a physical explanation is to blame. Your best friend may not have a clue about how depressed you’re feeling. That’s why asking people in your life for support rather than hiding away because you feel vulnerable and exposed is important.

Sharing your emotional and psychological problems for the first time can be difficult, but if you don’t, others who care about you may never guess. Your doctor may give you some measures to fill out that can help identify anxiety and low mood. But even a doctor needs you to give her basic information about how you’re feeling. Don’t wait for help to come; wave a metaphorical distress flag that others can’t miss.

Only very few individuals with far more severe and complex psychological disorders than those discussed in this book are ever a danger to others. Films hugely misrepresent mental disorders because it makes for good viewing; accuracy isn’t often the filmmakers’ main concern. You don’t go from having intrusive OCD thoughts or images to becoming a serial killer. Nor will your anxiety mount and mount until your mind eventually "breaks" and you’re no longer in control of your actions or are left a quivering wreck forever.

The common psychological disorders in this book don’t change your value system or alter your moral compass. You’re not a risk to others just because you’re feeling bad. Yes, people sometimes engage in self-harm, misjudge risks or have thoughts of suicide when experiencing poor mental health. It’s important to tell someone close to you, your therapist, doctor, and any other professional involved in your care if you’re self-harming or feel the urge to do so.

If you’re having thoughts of ending your life, seek support immediately, especially if you’ve developed a plan.

We always advise behaving with an abundance of caution where any risk is concerned. That said, having dark thoughts about the point of life and the future is very common when depressed or battling with another type of disorder. People often have unpleasant thoughts and images about ending their lives that they worry they may impulsively act upon. Having thoughts about dying or death doesn’t mean you’re intent on suicide. However, it does mean that you’re feeling really awful.

If you get a formal diagnosis, it does go on your medical record, as does any medication you’re prescribed. You’ll be in good company, however, with the many thousands of others with some mental health issue on their records. Records are there to make sure you get the best treatment possible if you change doctors or have to go into hospital. Their intended purpose is to be helpful, not to be used as ammunition against you in the future.

Most employers never see your full medical records. Also, the days of discrimination based on a history of psychological problems are over. Unfair treatment because of mental illness, past or present, is illegal. Know your rights; many charitable organizations offer legal advice, and some lawyers specialize in mental health cases.